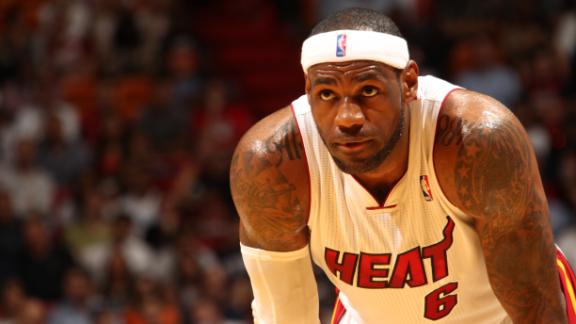 MIAMI -- The Miami Heat opened preparation for the playoffs Friday with what's been a rarity this season: LeBron James, Dwyane Wade and Chris Bosh practicing together.

After sitting out the final week of the regular season to rest and recover from persistent back and ankle soreness, James was on the practice court with his high-profile teammates for the Heat's first full workout in advance of Game 1 of their Eastern Conference first-round series Sunday against the Charlotte Bobcats.

Bosh also had been out for the past week for rest, but Wade played in each of Miami's final three games after returning from a nine-game absence due to a strained left hamstring.

On Friday, the Heat began getting their star players realigned for a run at a third straight NBA title.

"Probably the first day of training camp was the last time all of us were out there," James said after the team practiced for 2½ hours. "We all went through contact, and it was great. Guys are just ready for the playoffs.

"It's fun to have everybody out there competing. We've got to carry the load. We've got to set the example on and off the floor this postseason. It was great we were all out there."

James said sitting out the last two games of the regular season were beneficial mentally and physically. In addition to his nagging injuries, James has talked in recent weeks about the fatigue he's battled during a season in which the Heat used 21 starting lineups and were without Wade for 28 games.

Bosh had also worn down recently and had his least productive month of the season in April. He averaged 12 points and shot below 25 percent from 3-point range over his last five games. On Friday, he said it was good for the team to "hit the reset button" and get back in sync for the playoffs.

But coach Erik Spoelstra said having all 15 players available for the first time in months doesn't mean the Heat will automatically bounce back from having lost six of their last eight games.

The Heat have won 16 consecutive games against Charlotte, with 15 of those wins coming in the four seasons James, Wade and Bosh have been together in Miami. But Spoelstra pointed to the Bobcats' 20-9 record since the All-Star break as proof that they've been one of the league's hottest teams.

"Nothing about the postseason is ideal," Spoelstra said. "The only thing that's ideal is that you're in the postseason. Everything else, you have to deal with it. There will be so many things that happen, a lot of different adversities. You have to be able to manage that and find a way. We happen to be healthy now, as healthy as we've been in a long time, but that doesn't guarantee anything."

Wade said he spent the past three games working on his conditioning and putting himself in position to enter the series against Charlotte without any limitations. He played restricted minutes in those games and hasn't gone more than 24 minutes since he strained his hamstring during a March 26 loss at Indiana.

Earlier this week, Wade said he felt significantly better entering the playoffs this season than he did a year ago, when multiple right knee bruises affected his play throughout the spring and into the Finals. But Wade said Friday he didn't want to compare his health at this point to any other period this season.

"I don't want to put a finger on it, I just want to go out there and play," Wade said. "And hopefully, my play shows you. We've still got to put the work in. In games, when the moments get tough, we still have to figure it out."

James is just glad that the Heat have all of their top options available again, with the Big Three refreshed in mind and body.

"I'm ready to go," James said. "Obviously, we have another day of preparation [Saturday], but I'm ready to go. Any little time you can get [off], it definitely helps the body. I feel not as good as I've felt all year, but better than I felt before I took those games off. I needed it going into this stretch."

Defense Will Turn Up The Heat
ESPN NBA analyst Tom Penn discusses why defense is essential to the Heat's chances at a three-peat.