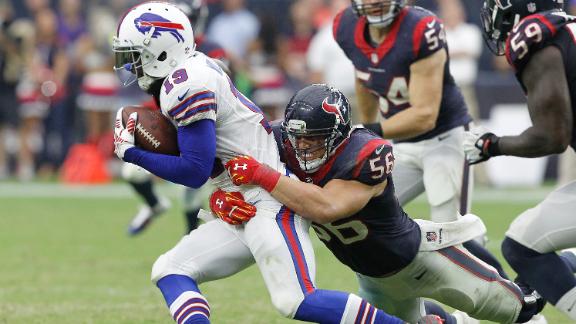 ORCHARD PARK, N.Y. -- After wide receiver Mike Williams was deactivated for the Buffalo Bills' 37-22 loss to the New England Patriots on Sunday, his agent has requested permission to gauge interest for a trade.

Bills general manager Doug Whaley said Monday that the Bills are not actively shopping Williams but will entertain offers. He added that no team has approached the Bills about Williams.

"I said, 'We like Mike Williams. We expect him back and we expect big things from him,'" Whaley said. "But like anybody, if he gets us compensation worthy of a No. 1 wide receiver -- which he claimed he is -- then we would entertain it.

"He's taken it as permission, but I see it as, anybody on this team, we have to do our due diligence, and if there's somebody out there that is willing to give us compensation that we think is fair, and would help us in the long run, we would entertain it. That doesn't say we're gonna do it, but we would entertain it."

Williams declined comment in the locker room Monday morning. His agent, Hadley Engelhard, said only that his client is "eager to reach out to teams."

Chill everybody I'm happy with being a buffalo bill....... I mean come on it's my dream my agent just did what a agent supposed to do ...

The Bills acquired Williams in an offseason trade with the Tampa Bay Buccaneers in exchange for a 2014 sixth-round draft choice. Williams, 27, has a guaranteed base salary of $1.6 million this season and his $5.2 million base salary in 2015 is also guaranteed.

Williams was a healthy scratch for Sunday's game. He posted the news on Instagram, accompanied by a backward picture of his jersey and the hashtag "wastedJersey."

"GameDay GOODLUCK TO MY COACHES AND TEAM MATES..... I'm not playing today but we still need this win TODAY I JUST WASNT IN THE TOP 53 this week I might make the cut next week #TeamMike....... #wastedJersey," Williams wrote.

After starting at wide receiver for the first four preseason games, Williams lost his starting job to Robert Woods by the beginning of the regular season. In five games, Williams has eight catches for 142 yards and one touchdown.

Coach Doug Marrone said the decision to deactivate Williams on Sunday came down to whether the Bills wanted an extra tight end or a wide receiver active.

"When that stuff happened and it went down on Saturday, Mike was disappointed as any player would be. But I thought he handled it very professionally, in my conversations with him," Marrone said Monday. "I just heard about it coming down -- because I've been in meetings all day -- about his agent called. Mike hasn't communicated anything like that to me. I've had zero problems with him."