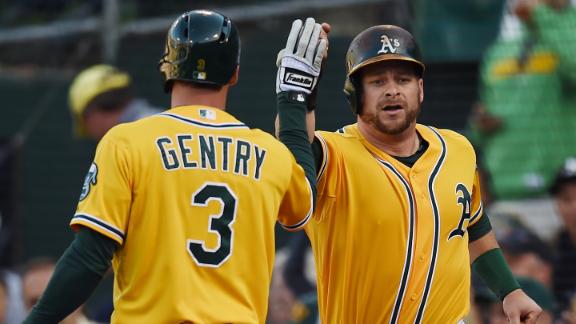 OAKLAND, Calif. -- The Toronto Blue Jays used a replay challenge to have their own runner called out in order to score a run.

Toronto loaded the bases with one out in the second inning of Thursday night's 4-1 loss to the Oakland Athletics. Anthony Gose then hit a grounder to first baseman Nate Freiman. Freiman appeared to tag Munenori Kawasaki as he ran for second base, but umpire Vic Carapazza ruled Freiman missed the tag and Kawasaki was safe.

Freiman threw to catcher Stephen Vogt, who stepped on home plate for a forceout with Edwin Encarnacion, the runner on third, approaching.

Blue Jays manager John Gibbons argued that Kawasaki was out and that Encarnacion should be allowed to score because there would have been no force play at the plate.

After a delay of 4 minutes, 27 seconds, the call was overturned and the Blue Jays were given a run.

Oakland manager Bob Melvin immediately came out to argue. The A's played the remainder of the game under protest.