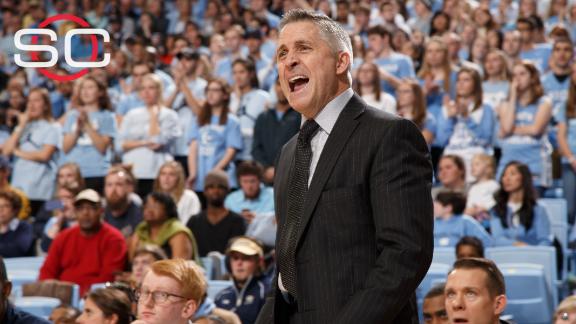 "At the end of the day the evaluation for me came down to what does the future look like,'' athletic director Mike Bobinski said. "Do we in fact have a clear path forward to greater success and higher levels of success in the years ahead, and my determination was, I didn't see it. I ultimately didn't see it and ultimately led me to the decision that we needed to make a change."

Georgia Tech finished 21-15 overall and 8-10 in the ACC this season. The team made the postseason for the first time in Gregory's five seasons, winning two games in the National Invitation Tournament before losing in the quarterfinals.

Bobinski said the team's failure to make the NCAA tournament factored into his decision.

"It's hard to deny that would have given us a different thought," he said in a news conference.

Georgia Tech will owe Gregory more than $1.3 million for the final two years of his contract. Hewitt, who took a $7.2 million buyout after he was fired in 2011, is still owed $2.7 million from the school over the next three years.

Gregory came to Atlanta from Dayton, where he was 172-94 in eight seasons and took the Flyers to the NCAA tournament in 2004 and 2009. Before getting the head-coaching job at Dayton, Gregory was an assistant for Tom Izzo at Michigan State.

Goodman on Gregory's oust at Georgia Tech
ESPN college basketball Insider Jeff Goodman explains why Brian Gregory is out as coach at Georgia Tech after a trip to the NIT, where the program is headed in the short term and gives a few names that the Yellow Jackets will go after.
Related topics:
sportsespnfiredbrian gregoryhead coachmens college basketballgeorgia tech yellow jackets
Copyright © 2021 ESPN Internet Ventures. All rights reserved.
More Videos
From CNN Newsource affiliates
TOP STORIES