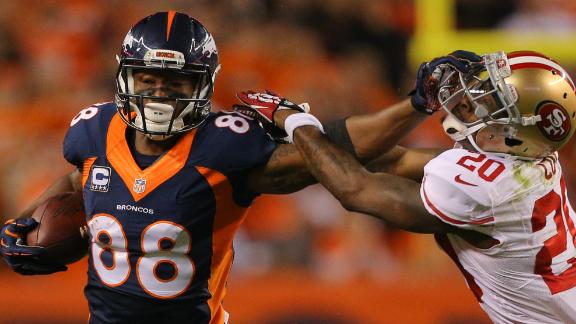 ESPN
By Adam Schefter
The Denver Broncos do not expect to re-sign two free-agents-to-be, wide receiver Demaryius Thomas and tight end Julius Thomas, during the season, according to sources.

Instead, Denver plans to wait until after this season to tackle a situation as challenging as the one that opposing defenses face during games.

The Broncos have only one franchise tag to use between the two, meaning that if Denver cannot re-sign one Thomas between the end of the season and the start of free agency, the other one will be allowed to hit the market and leave if he receives a better offer.

The Broncos have negotiated with both men, but with neither close to a deal, Denver recognizes that it will have to wait until after the season to address it again.

By then, Denver's work will be challenging. Each Thomas is having another monster season, with the cost of business going up.

Denver wide receiver Wes Welker also is playing on an expiring contract, making it even more difficult for the Broncos to bring back all the parts of an offense that has evolved into one of the best in the NFL, averaging 31.5 points a game.

Broncos Table Contract Talks With Thomases
Adam Schefter discusses the news that the Broncos have ended in-season contract talks with WR Demaryius Thomas and TE Julius Thomas, and whether Denver will be able to keep both players.

No Question, Demaryius Thomas Has His Groove Back
ESPN Broncos reporter Jeff Legwold discusses why, with the most productive three-game streak for a wide receiver in franchise history, Demaryius Thomas is a matchup to watch against the San Diego Chargers on Thursday night.