Bumgarner could pitch out of pen 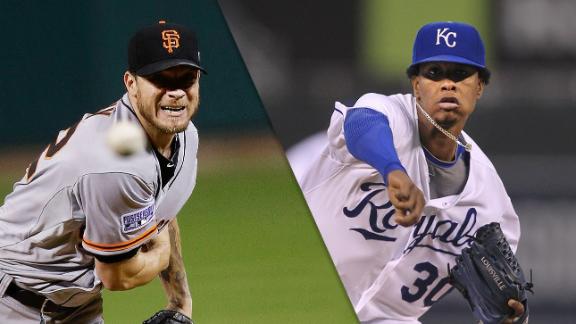 San Francisco's Madison Bumgarner, who pitched a four-hit shutout Sunday, says he'll be available to make a relief appearance if needed as the Giants attempt to close out the World Series on Tuesday.

Bumgarner hasn't made a relief appearance since throwing two scoreless innings in Game 6 of the 2010 National League Championship Series.

The Giants will startJake Peavyagainst the Royals in Game 6. San Francisco holds a 3-2 edge and is one win from its third title in five years.

"Well, I expect Jake Peavy to throw a shutout," Bumgarner told CSNBayArea.com. "That's what I expect. But we'll be ready for anything."

Bumgarner, who threw 117 pitches Sunday, wouldn't estimate how long he could go.

"I'm not a big pitch-count guy," he said. "So as long as you keep getting outs and you feel good, you should stay out there."

"He really bounces back well, and we wouldn't ask him to do a lot," manager Bruce Bochy told CSNBayArea.com. "But if I needed to get an out or something, I'm sure he'll say he's available."

Peavy, 33, will face 23-year-old rookie Yordano Ventura in a rematch of Game 2 starters. Ventura picked up a no-decision in that game, while Peavy took the loss.

The veteran is seeking his first World Series win -- he didn't get a decision for Boston in Game 3 last year -- and is well aware he could get the victory in the clincher.

"I can't imagine anything being any sweeter than that," Peavy said. "This is the start that you play your whole career wanting."

With the shift to the American League ballpark, designated hitters return: Billy Butler for the Royals and Michael Morse for the Giants.

San Francisco's Tim Hudson and Kansas City's Jeremy Guthrie would be the likely Game 7 starters if the Series is extended to Wednesday.

In the 41 previous instances in which the Series was 2-2 in the best-of-seven format, the Game 5 winner took the title 27 times. But eight of the past 10 teams to come home trailing 3-2 swept Games 6 and 7.

Bumgarner Adds To His Postseason Resume
Adnan Virk and Aaron Boone break down Madison Bumgarner's shutout against the Royals in Game 5 of the World Series.