Cards not cutting Washington yet 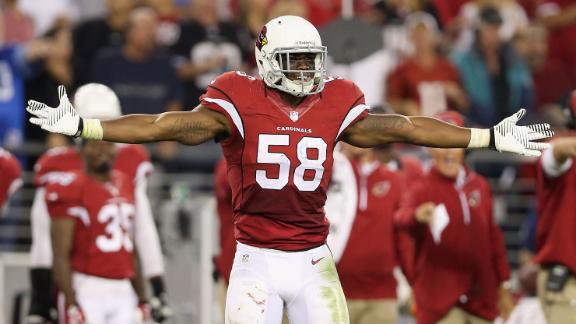 Fuming over the yearlong suspension of Daryl Washington for another violation of the NFL's substance abuse policy, the Arizona Cardinals seem prepared to challenge the player's right to some of the $10 million option bonus they recently activated.

A source within the organization told ESPN that none of that money has actually been paid to Washington and conceded that one of the reasons the team won't consider releasing him is because it might no longer be entitled to keep a portion of that money.

When the Cardinals activated the option on Washington's contract in March, they committed $10 million to the team's most dynamic front-seven player in equal $5 million installments. Sources within the organization say that Washington will be placed on the reserve-suspended list after a positive drug test the player says was for using marijuana.

Washington's suspension will cost the Cardinals linebacker $6.5 million between now and December in forfeited bonus and salary.

He was suspended for four games last season as well.

Sources say there are two reasons the Cardinals won't cut Washington yet: His cap acceleration would be approximately $7.5 million, and they would not be entitled to recover some of the aforementioned $10 million option bonus -- none of which has been paid at this point. So rather than attempt to force Washington to repay the money, the Cardinals are prepared to argue they shouldn't have to pay him in the first place.

Cardinals Don't Plan To Cut Daryl Washington
Ed Werder discusses the news that one of the reasons the Cardinals won't release LB Daryl Washington is because it might not be entitled to keep a portion of the $10 million option bonus they recently activated.