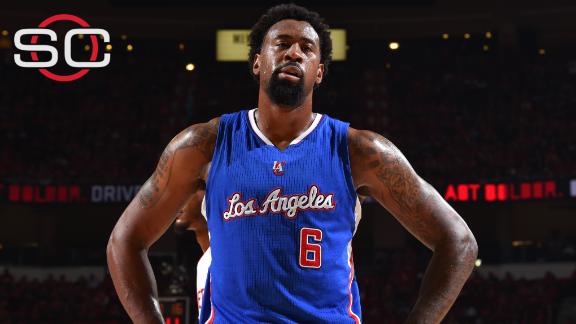 DALLAS -- For all of the charming thatChandler Parsons did during the recruiting process, he believes the biggest factor in DeAndre Jordan deciding to come to the Dallas Mavericks was a desire to be the NBA's next dominant big man.

Led by Parsons, the Dallas recruiting contingent convinced Jordan to leave the Los Angeles Clippers to accept a four-year maximum contract worth more than $80 million with the Mavericks, a commitment the third-team All-NBA center made Friday.

Jordan had deep emotional ties to the Clippers, the only team he has played for during his seven-year NBA career. But he entered free agency intrigued by the possibility of playing a bigger role in Dallas after being the third wheel behind Chris Paul and Blake Griffin in Lob City.

Parsons and the Mavs pounced on that opportunity, convincing Jordan that he needed to be a primary option for the Mavs to fulfill his immense potential.

"It all came down to him being the best center in the NBA, an All-Star-caliber and MVP-caliber player in this league," Parsons told ESPN.com in his first public comments since the Mavs secured the commitments of Jordan and shooting guard Wesley Matthews, their other top target in free agency. "No doubt in my mind that [opportunity] was here in Dallas."

Parsons, who played a huge role in recruiting Dwight Howard to the Houston Rockets two summers ago, said recruiting Jordan and Matthews became an "obsession" for him.

Parsons has been in daily contact with Jordan since the Clippers' season ended with a Game 7 loss to the Rockets in the Western Conference semifinals, constantly contacting him via FaceTime and text messages to stress how much Jordan meant to the Mavs while emphasizing the possibilities for the big man as an offensive focal point in Dallas.

Jordan and Parsons, who are both represented by agent Dan Fegan and had formed a friendship over the years, became especially tight this summer. Parsons and Pausha Haghighi, Parsons' best friend from childhood and personal assistant, traveled to Jordan's hometown of Houston on June 19 to spend a weekend hanging out with Jordan and his friends and family.

Parsons and Haghighi also flew to Los Angeles after the draft on June 25 and spent much of the next six days with Jordan and his family. The Mavs' official meeting with the center was on July 1.

"I was basically just telling him that we want you," said Parsons, who organized a dinner with Mavs legend Dirk Nowitzki, owner Mark Cuban, Jordan and himself at a swanky sushi restaurant in Malibu for the second free agency started Tuesday night. "You're our priority. We believe that you can be a 20 and 15 a night kind of guy. We think that you are the best center in the NBA, and we think that there's no other place better than Dallas [to prove it].

"With coach [Rick] Carlisle's system, adding guys like me and Wes and Dirk, savvy older veteran point guards like J.J. [Barea] and Devin [Harris] and Raymond [Felton] all around you, we can make you the best player possible that you can be. I think that was the biggest thing that he wanted, and I think he saw that the opportunity was here.

"I think he's a perennial All-Star. I think he's the most athletic, best defending, finishing lob threat in the NBA. He has a chance to be the best center in the NBA the next 10 years."

The Mavs also met with LaMarcus Aldridge, but Jordan was their top priority and the max-contract-worthy free agent they felt they had the best shot of landing.

Dallas' backup plan disappeared just before their meeting with Jordan, when they were informed that center Tyson Chandler had committed to a four-year, $52 million contract with the Phoenix Suns, opting not to wait to see how the recruiting process with Jordan played out.

The Mavs intended to attempt to re-sign Chandler, the best center in franchise history despite spending only two one-season stints in Dallas, if Jordan chose to return to the Clippers.

"That definitely put us in a tight spot, because if DeAndre didn't come we would have been scrambling," Parsons said. "I'm happy for Tyson. He's one of my favorite teammates I've ever played with. I truly do wish him nothing but the best of luck. There's no hard feelings there at all, but we got the guy we wanted."

Parsons and Jordan had mutually agreed that Matthews, a prolific 3-point shooter and shutdown defender who is recovering from a torn left Achilles tendon, was the best potential fit to play with them among the shooting guards in the free agency market. They worked out and hung out with Matthews in Los Angeles in the days before free agency opened, discussing the possibilities if the three of them played together in Dallas.

Matthews made a verbal commitment to sign a four-year deal worth more than $50 million with the Mavs on the second night of free agency, just as Jordan was wrapping up his meeting with the Clippers -- the last of four teams that made presentations to the big man. Parsons thinks Matthews' commitment helped push Jordan to join Dallas.

"That was definitely part of the game plan," said Parsons, who is recovering from knee surgery and was astounded by Matthews' remarkable progress while rehabbing with him in L.A. "To add a piece like Wes Matthews, who obviously had that unfortunate injury -- but if anybody is going to come back from that, it's going to be a guy like Wes who has an unbelievable work ethic. That was just an example of us showing [Jordan] that we're serious.

"We're going to go and add one of the best 2-guards in this league who can defend and post up and space the floor and knock down shots. When you look at us three, I couldn't think of a better 5 and 2 that I would want to play with. With our styles, with me being able to handle and get in the lane, having the best lob target rolling to the rim and one of the best shooters spotting up is a really good combination. It's going to be tough to guard. I just wanted to make sure we got Wes committed. Once I knew he was in there, I think that definitely helped going forward with [Jordan] making his decision."

Soon after the Mavs locked up Matthews, Parsons joined Cuban on the owner's private jet to return to Los Angeles for Jordan's decision, surprising the center. Jordan told Cuban that he was coming to Dallas on Friday morning during a conversation in the backyard of the center's suburban L.A. home.

"I hear this scream in the backyard. It's Cuban, walking inside with his hands up like, 'We got him!'" Parsons said. "It was unbelievable, man. I was so hyped. I was so excited because he really is a franchise-changing type of player. They don't come around very often."