Chris Bosh likely out vs. Cavs 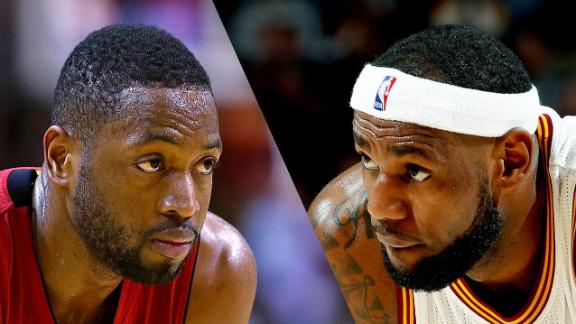 MIAMI -- Heat starting center Chris Bosh continues to recover from a calf injury and is doubtful for Thursday's Christmas showdown against LeBron James and the Cleveland Cavaliers.

Bosh went through an extensive workout with the Heat's training staff Wednesday and did some light shooting drills after the team's practice at AmericanAirlines Arena.

Heat coach Erik Spoelstra wouldn't rule out the possibility of a surprising change in status by Thursday morning but said he wasn't planning on Bosh being available to face the Cavaliers.

The Heat have been without Bosh since he strained his left calf in a Dec. 12 victory against Utah. He has missed the past six games, which has culminated with the Heat blowing a 23-point lead in the third quarter on the way to Tuesday's 91-87 home loss to Philadelphia.

"The majority of his time, I don't want to be misleading -- 80 to 90 percent of his time -- is with [trainers] right now," Spoelstra said. "He did a bunch of work with them [Tuesday] morning and then came up to our shootaround and did some light shooting. So that's it."

Bosh did not speak with reporters after Wednesday's practice.

Over the weekend, Bosh said he wouldn't rush the recovery process but hoped to make enough progress to possibly play Thursday. The game marks James' first visit to Miami since his surprising departure in free agency this past summer to return to Cleveland.

The Heat (13-16) have lost 10 of 15 home games this season and are off to their worst start in seven seasons largely because of injuries that have forced Spoelstra to use a dozen different starting lineups. Miami has struggled to account for the absence of Bosh, who is averaging 21.6 points and 8.2 rebounds.

"Obviously, if you're missing a guy like Chris for any amount of time it's very, very tough, when most of our offense is predicated toward myself and him," Heat guard Dwyane Wade said. "We miss 22 points a night. But outside of that, it's just not having the continuity from night to night. The frustrating thing about this team is that we're close to where we want to be, but we're just not where we want to be."

The Heat were hoping to be as close to full strength as possible heading into the game against Cleveland, as the team has been battling injuries all season.

Wade missed seven games earlier in the season with a strained hamstring. Earlier this week, forward Josh McRoberts had knee surgery, and he is expected to miss the rest of the season.

The Cavaliers, however, are dealing with a major injury as well. Starting center Anderson Varejao suffered a torn Achilles in Tuesday's win against Minnesota and is likely to miss the rest of the season.

"We don't know who's going to go for us right now," Heat guard Mario Chalmers said. "But it's an early game, and I would rather have us at full strength later in the season than right now in December. So we just have to take it. Not having that option with Chris is making everybody else have to step up."