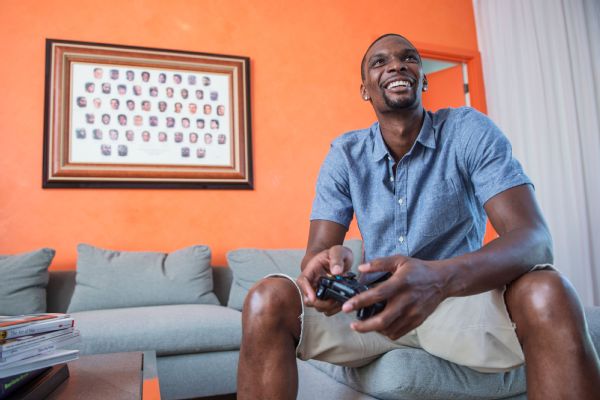 MIAMI -- Chris Bosh has issued a response to those who might think he should abandon his hopes of playing in the NBA again in order to ensure he's healthy to raise his five children.

His message: His children are why he wants to keep playing.

"I want my children to know that Daddy was a fighter and he just didn't give up very easily," Bosh said.

Bosh released the latest -- and since it was called "Finale," presumably the last --installment of his video serieson LeBron James' Uninterrupted platform Tuesday, parts of which were apparently taped on the day the Miami Heat began training camp in the Bahamas last month.

Bosh -- who had his last two seasons cut short because of blood clots -- remains on the Heat roster, though is no longer in the team's plans going forward after he failed his preseason physical last month and wasn't cleared to resume basketball activities. He's owed nearly $76 million for the next three seasons, money that is guaranteed even if he doesn't play.

"What I would say to the people who just see the money and kind of see my situation and say, 'Hey, just walk away' -- I get it. I totally get it. I understand you. I hear you," Bosh said. "But I'm not really thinking about money. I'm just thinking about where my heart is. I love the NBA. I love playing basketball every day for a living."

Bosh, 32, repeated that he plans to continue trying to play, and said he believes basketball is "just what I've been placed here to do." He also said he wants his quest to play to serve as a reminder to people that giving up on a goal should not be done lightly.

"All I have to do is just leave and you'll never hear from me again," Bosh said. "I'll probably just do other things and I'll be fine -- and that makes it confusing, because I know where my heart is. And I would just feel like I'm giving up if I just walked away, just easily like that."
Related topics:
sportsespnchris boshblood clotsuninterruptedmiami heatnba
Copyright © 2021 ESPN Internet Ventures. All rights reserved.
TOP STORIES
EXCLUSIVE: Man's dashcam catches 'blatant racism' by autoworkers
Estrada Fire grows to 150 acres in Santa Cruz Co., CAL FIRE says
Man in wheelchair stranded after bus crashes into Oakland home
IN kids mistakenly get COVID vaccine instead of flu shot: parents
La Niña winter weather: How it could impact CA wildfires
Preliminary magnitude 3.4 earthquake rattles North Bay, USGS says
SF, Marin counties ease mask restrictions Friday
Show More
Pushback after BART approves mandatory employee COVID vaccines
Bay Area health officials share guidelines for safe Halloween
3 fires break out within 8 hours in SJ, including at a school
Victim of the Bank of America, Zelle scam? Here are your rights
FDA panel endorses booster shot for J&J COVID-19 vaccine
More TOP STORIES News