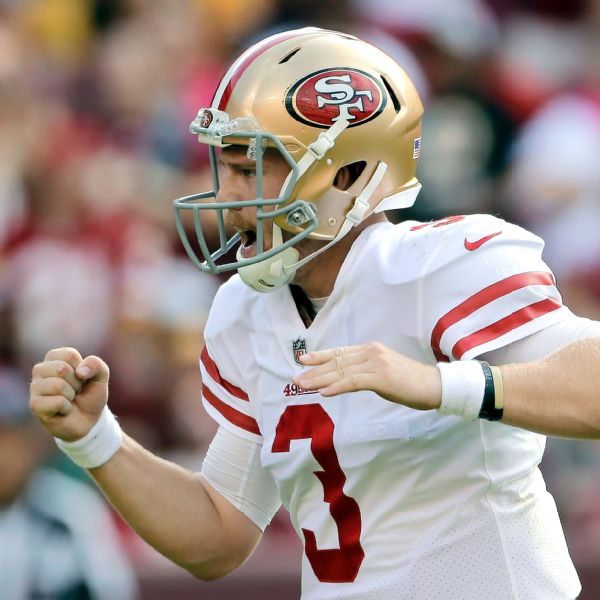 SANTA CLARA, Calif. -- San Francisco 49erscoach Kyle Shanahan gave plenty of thoughtthroughout the bye week and into the start of this week to changing quarterbacks from rookie C.J. Beathard to Jimmy Garoppolo.

After careful consideration of Garoppolo's status as a relative neophyte in his offense and how well Beathard played in the Niners' most recent game, a 31-21 win over the New York Giants that marked their first victory of the season, Shanahan is sticking with Beathard for at least one more week.

Shanahan announced Wednesday that the plan for Sunday's game against the Seattle Seahawks will be the same one the Niners have used in the weeks since Garoppolo's arrival with Beathard as the starter and both quarterbacks being evaluated for their work in practice throughout the week.

"I don't see it much different than other weeks," Shanahan said. "I plan on starting C.J. this week. As always, we'll see how practice goes, just like we would with any other position. But reps-wise and everything, we see the same this week as it's been."

With a bye last week, the Seahawks game had seemed like the most logical time for Garoppolo to step into the starting lineup. The Niners were able to use the time off to get healthier; Garoppolo had a chance to get more familiar with the offense; and their next game was at home against a familiar opponent.

But what seemed like a sure thing changed Nov. 12 when Beathard threw for 288 yards on 19-of-25 passing with two touchdowns and an interception for a passer rating of 123.4. He also rushed for a touchdown that helped seal the Niners' first victory of the year.

Benching Beathard after that performance and a victory proved to be a prominent factor in Shanahan's decision to stick with him for another week.

"C.J. did play his best football last week, which definitely, to me, made the decision easier," Shanahan said. "It wasn't just C.J. but the offense around him, everyone together. I thought that group of 11 guys when they were out there, they had their best game and that was important for C.J. It was also important for our team.

"I did go into the weekend and all week and into Monday considering Jimmy, but definitely, the way that game went, I knew it was going to make it easier for me to stick with what we've been doing, because I think we've made a stride in that way and I don't think it's totally right for Jimmy, C.J., the entire team and organization just to change that right away."

Aside from Beathard's performance against the Giants, Shanahan's decision also largely came down to how far Garoppolo has come since he arrived in the trade the Niners and New England Patriots consummated on Halloween.

Because Garoppolo showed up in the middle of a week, most of his understanding of Shanahan's offense has been specific to the past couple of game plans. Given the bye week, Garoppolo was able to spend extra time at the team facility with Shanahan and quarterbacks coach Rich Scangarello.

That time was mostly spent working backward and giving Garoppolo more of a fundamental understanding of the offense. He watched installation tapes from organized team activities and was able to get a better grasp of how the Niners have built their offensive scheme. Aside from a few relaxing hours spent Sunday watching football, Garoppolo said he spent the rest of that time in his playbook.

"It was a bit like training camp, just putting in the time, trying to get much as I can down," Garoppolo said. "It's a grind right now, but things are coming together. ... The competitor in me -- obviously you want to get out there and play with your teammates and help the team win, but it's a tough situation coming in midway through the season, so it's going to be a process, but we'll get there."

Despite the decision to stick with Beathard for another week, Shanahan also said Wednesday that Garoppolo "eventually will" get the opportunity to play this season.

At Monday's practice, Garoppolo split reps with Beathard, but that workout was considered a "bonus" and didn't center on planning for Seattle. For the rest of this week, Shanahan said the Niners would return to normal practice protocol with Garoppolo taking roughly two or three snaps with the first-team offense in each 10-play period.

"Jimmy gets more and more ready each week," Shanahan said. "Is Jimmy going to be the best he can? To me, that's impossible. He just hasn't been here long enough. I think he'll get an opportunity to be better each week. I don't think we're going to see Jimmy's best football, to be fair to him, until next year because that's what guys need."

No matter what happens against the Seahawks, Shanahan is also clearly aware that the question of Garoppolo's debut will continue to linger. If the Niners lose to the Seahawks this week and Beathard struggles, the drumbeat for Garoppolo will get louder heading into next week.

And if Garoppolo's time comes then, it would offer yet another layer to an already intriguing situation. Next week's opponent? Garoppolo's hometown Chicago Bears.