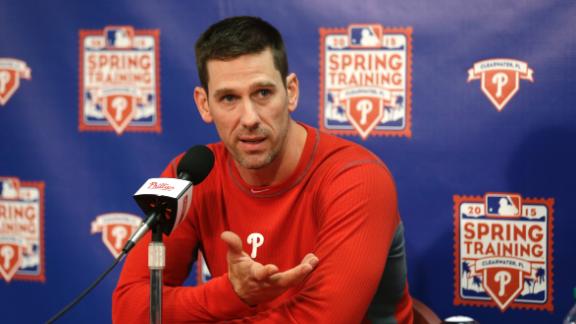 On Tuesday, Lee threw lightly for the first time since reporting pain in the flexor tendon Friday. He has been cleared to resume a progression toward a "normal" throwing program again, Amaro said. However, if Lee feels discomfort, the GM said, "The next order of progression, I guess, would be to have a surgery."

Lee has tried to rehabilitate the injury twice already without surgery, and both times he reported feeling discomfort.

"The probability of that happening again is probably pretty high," Amaro said.

But neither the club nor Lee will make any decisions until they see how Lee responds to throwing.

Scott Sheridan, the Phillies' head athletic trainer, said he spoke Tuesday with Andrews, who after seeing the MRI agrees that Lee's condition "looks exactly the way it did last year."

"Right now," Sheridan said, "everyone is in agreement. We'd like Cliff to continue to toss a little bit and see where we go with it. Ultimately, if this fails, then medically we have to decide from there."

Asked why Lee continues to feel discomfort if the MRI shows no additional injury, Sheridan replied: "Well, the MRI, he has a tear in it [the elbow], so he's still feeling that. There will be some changes in his MRI for the rest of his life. There will always be something on there. And you have to understand: The MRI doesn't always match up with the symptoms that you're treating. You can't treat the MRI. You treat the player."

On Thursday, Lee pitched for the first time this spring then told trainers the next morning that the discomfort near his elbow had returned and that it felt similar to when the injury first occurred in May.

If he needs surgery, the normal recovery time is six to eight months, Sheridan said Tuesday. That effectively would end the Phillies career of Lee, 36, who is in the final year of a five-year deal. Lee said Monday it could even end his baseball career overall.

A torn flexor tendon is not an injury that would result in Tommy John surgery, Sheridan said, but it would require a complete repair of the tendon, followed by an extended rehabilitation period.

Sheridan did not rule out the possibility that Lee is feeling discomfort as a result of scar tissue, adding "all these things are possibilities."

He also said it is likely that a number of pitchers have been able to pitch "with something like this at some point in time, [but] you don't know it because they don't come in and complain about it. They just think that's how they're supposed to feel."

Asked why the Phillies would choose to allow Lee to resume throwing if they are not optimistic it would work, Amaro said: "It may not even take a couple of weeks. It may take a couple of days. A lot of it will depend on how he does when he continues his throwing progression."

Lee wasn't immediately available for comment Tuesday. One day earlier, he had told reporters that he wasn't confident he could throw again without "feeling a little something."

"But you don't know until you do it," he said. "It's not like it's a major pain. It's not like it's majorly painful. It's what it felt like at the start of when I started feeling it last year. Knowing what I know now, my body does the same deal, then it's probably going to come back. But there's still a chance that it's scar tissue and it's normal."

Asked if he could damage the tendon by trying to pitch through it, he answered: "That's a question for the doctors. I don't know. I was wondering the same thing. I could try. I want to try. We'll see what happens."