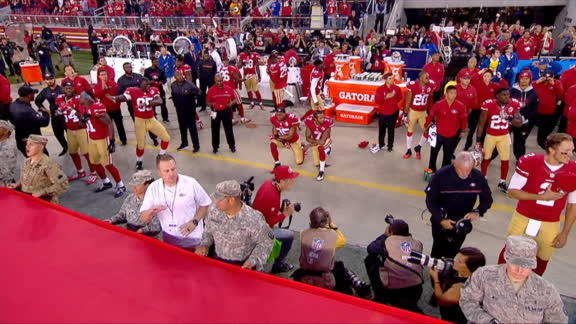 For the second game in a row, Kaepernick and safety Eric Reid knelt during the song while teammates Antoine Bethea and Eli Harold stood and held up their right fists.

"I think it's become so blatantly obvious that athletes and people in general have to react," Kaepernick said. "It's not something that, with social media, there's so many instances where it's instantly to you and you see these things every day, day after day and that's hard.

"For me, it was something that I couldn't see another 'hashtag Sandra Bland, hashtag Tamir Rice, hashtag Walter Scott, hashtag Eric Garner,' the list goes on and on and on," Kaepernick said. "At what point do we do something about it? At what point do we take a stand and as a people say this isn't right? You have a badge, yes. You're supposed to be protecting us, not murdering us, and that's what the issue really is and we need to change that."

Rams defensive end Robert Quinn and receiver Kenny Britt also held up fists. Britt also was one of five Rams players to raise hands before a game after unrest in Ferguson, Missouri, in 2014.

"Just standing up for my rights," Quinn said. "Everyone knows the whole situation. Long story short, Fisher asked us to stand. So I respect him enough to do that. But at least to show awareness, raise my fist, show support out there that you have support throughout the league. I didn't want to try to distract the team; just want to have my right of freedom."

Harold, the San Francisco linebacker, said the issue was "bigger than football" and that he took exception to fans' reaction when Kaepernick came in.

"What really pissed me off was when Kap was getting snaps at the end of the game and the crowd was booing," Harold said. "I'm not throwing shots at our fans. It's not about that. Liberty and justice for all. Just because this man is standing up for something he believes in doesn't give you the right to boo him. I just don't understand it, man. I really don't."

"This is our profession, but if a guy wants to stand up and believe in something, you shouldn't shoot him down and talk down on him and say he put himself above the team when that wasn't the issue," Harold said.

Kaepernick said earlier this week that he would continue to kneel during the national anthem and reaffirmed that plan to ESPN's Lindsay Czarniak on Monday night.

"I know there's conversations that players are having in the locker rooms," Kaepernick said. "We've had them in our locker room as well. People are really feeling their humanity and really feeling like, you know what, this might not be something I experience on a daily basis, but it's not right that these other people are going through this. And that's ultimately what it comes down to."

Last week, Jed York, the 49ers' chief executive officer, pledged $1 million from the team's charitable foundation to the Silicon Valley Community Foundation and the San Francisco Foundation, organizations with goals to assist in some of the same areas Kaepernick is attempting to help.

Kaepernick previously pledged the first $1 million he makes this season to help communities in need and has said he will do the same with proceeds from his jersey sales.

On Monday night, York said he and Kaepernick have had conversations over the past few weeks and again offered support to Kaepernick's efforts.

"I'd just say that human rights is a philosophy that everybody should hold dear," York said. "It's not easy to make a stand and to do something that's not popular -- that's everybody -- and I think that's what Colin has done, but I think he's done it in a respectful way. He's trying to bring a voice to people that he doesn't feel have one, and I think we want to do the same thing and try to help."

York added that he has no problems with his players figuring out which actions they want to take and then following through.

"I'm not going to tell the guys what to do," York said. "I'm not going to get into that. That's not my place. The locker room will take care of itself. I think even with this, when everybody wants to talk about is this a distraction, what's going on, it's been something that I think has been an issue that most people haven't discussed openly in locker rooms and quite honestly most places. And I think our locker room is one of the places where guys can ... they find a way to actually have a conversation about it as opposed to looking and having a preconceived notion of what does this mean and then kind of going their own separate ways."

While Denver Broncos linebacker Brandon Marshall has lost endorsements over his decision to kneel before Thursday's game against the Carolina Panthers, York said the 49ers have received no blowback from sponsors.