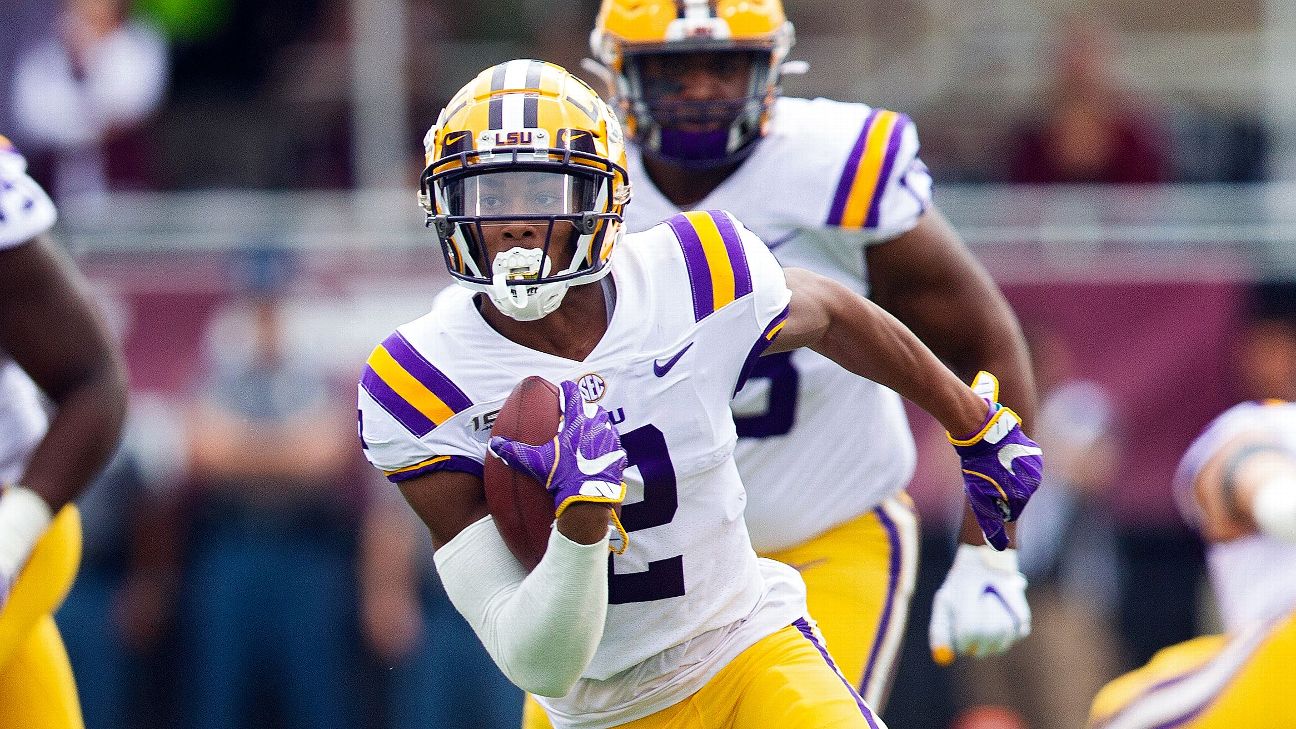 When Tua Tagovailoa rolled his ankle against Tennessee and had to leave the game, Alabama's hold on the top spot in the SEC ended.
It's time to move LSU to No. 1 in the rankings.

Now let's be clear: Tagovailoa's high-ankle sprain doesn't mean that the Tide's season is over. Nick Saban said Tagovailoa could return in a week or two, which is relatively good news on the face of it.

But remember last season when Tagovailoa had a high-ankle sprain? It was his other foot, but do you remember how he wasn't the same after surgery against Georgia and Clemson?

Alabama needs him at 100 percent because this team isn't perfect. Special teams are a sore spot, the running game has been inconsistent, and the defense, which is starting four true freshmen, has gone through growing pains.

What's more, there was reason to put LSU at No. 1 weeks ago. With a suddenly dynamic offense, a Heisman Trophy contender at quarterback (Joe Burrow) and maybe the two best wins by any team in college football (Texas, Florida), the Tigers deserve the nod for now. -- Alex Scarborough

Wisconsin suffered a shocking loss to Illinois, and that bumps the Badgers down one spot below Penn State in the latest Big Ten power rankings. Although Michigan lost to the Nittany Lions, it played one of its best games of the season, showing improvements on offense. Whether that sustains for the remainder of the season is yet to be seen. Ohio State hasn't budged at the top after another convincing win Friday and is looking more like a playoff team each week. Minnesota is still hovering in the middle of the rankings, but if the Gophers can string together some late wins against good opponents, they have a chance to move up. The middle of the conference is still difficult to judge, but we should soon be able to weed out the top from the bottom. -- Tom VanHaaren
1. Ohio State

For the first time this season, we have a change near the top of the Big 12 rankings. Although Oklahoma remains head and shoulders above the rest of the conference, we have a new No. 2: Baylor. The Bears are off to an impressive 7-0 start, capped by Saturday's victory over Oklahoma State. Texas -- with its banged-up defense -- survived a scare from Kansas in Austin but clearly isn't playing like it was early in the season. Meanwhile, the middle teams in the league -- Texas Tech, Oklahoma State and Kansas State -- are all a bit difficult to decipher, as each has only one league win but has had impressive moments during the season. -- Sam Khan Jr.
1. Oklahoma

From a national perspective, the most important thing that happened in the Pac-12 this week was Oregon's comeback win against Washington, which kept the Ducks in the College Football Playoff conversation and essentially ended the Pac-12 North race. If they continue to play as well as they did in the second half at Husky Stadium, the Ducks will be tough to beat. Next up: Washington State. The Cougars have won four straight games in the series, the past three by at least two touchdowns. Utah is the only other team in the conference that, at this point, seems like a threat to Oregon to win the conference. The Utes picked up a key win against Arizona State and remain tied with USC atop the South (the Trojans hold the head-to-head tiebreaker). After that? It's wild. Oregon State (!) sits alone in second place in the north, and Stanford continues to look like a shadow of what has been expected from program over the past decade. -- Kyle Bonagura

Week 8 brought the ACC a little bit of history when North Carolina and Virginia Tech played six overtimes -- the most in ACC history -- under the new college football overtime format. When it was all over, Virginia Tech came away with a huge, 43-41 victory that had both teams attempt 2-point conversions only beginning in the fifth overtime. The win was huge for Virginia Tech coach Justin Fuente, whose team went from dramatic lows (a 45-10 home loss to Duke) to dramatic highs (the UNC win) in a four-week span. It was another heartbreaker for the Tar Heels, who have lost four games by a combined 12 points. There was one more overtime game in the league: a stunning 28-21 Georgia Tech victory over Miami, the Yellow Jackets' first ACC win of the season. The loss represented a low point for a Miami team that has underperformed the majority of the season and brought renewed scrutiny to new coach Manny Diaz. Clemson cruised over Louisville after a slow start, and thanks to North Carolina's loss, Virginia is once again the ESPN FPI favorite to win the Coastal -- at least for this week. -- Andrea Adelson
1. Clemson 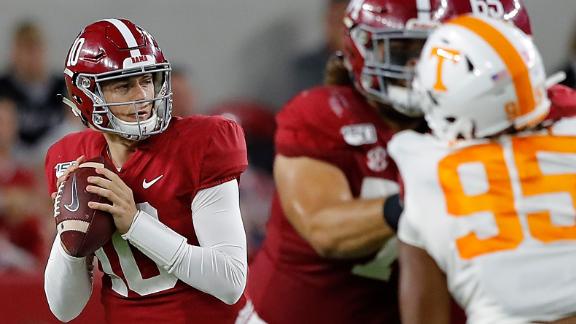 Alabama tops Tennessee despite Tua's injury
With Tua Tagovailoa exiting the game due to injury, the No. 1 Alabama offense steps up and continues to dominate as the Tide handily beat Tennessee 35-13 at home. 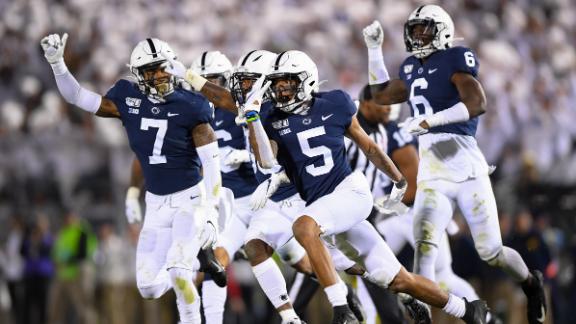 Penn State holds off Michigan for dramatic win
After nearly losing a three-touchdown lead, Penn State is able to hold on to beat Michigan 28-21. 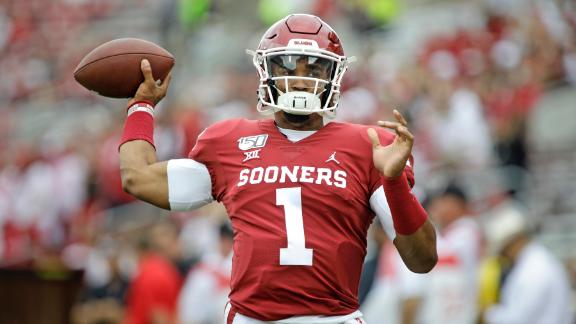 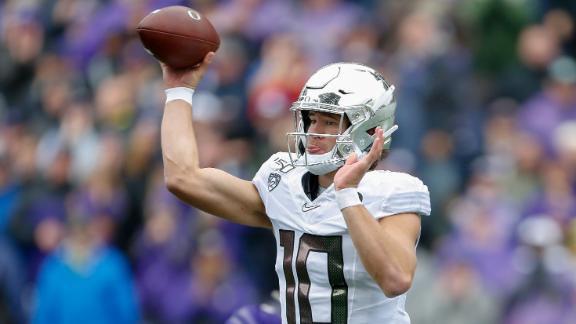 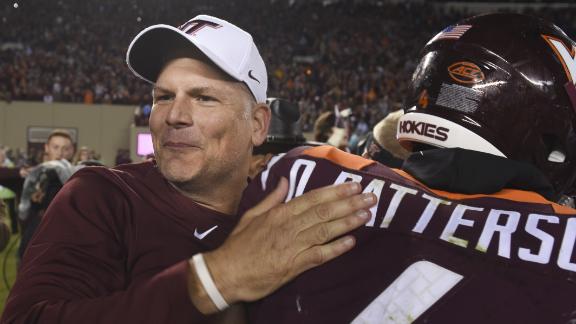