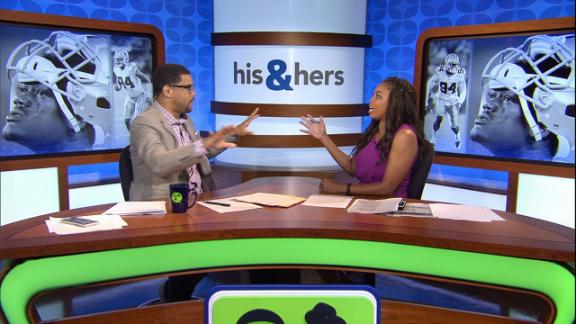 With at least three players suspended for part of the 2016 season, the Dallas Cowboys will be subject to a fine in the range of $250,000, based on last year's club remittance policy.

The league still is formulating this year's fine schedule, which is based on the number of players suspended on a single team. Last year, any team with three players suspended -- the position the Cowboys are in this year with linebacker Rolando McClain and defensive ends DeMarcus Lawrence and Randy Gregory -- had to pay a fine up to $250,000.

The fines are not expected to decrease this season under the new schedule.

The club remittance policy was created to hold teams accountable for acquiring players who have violated various NFL policies, by fining them an amount that equals up to 25 percent of the worth of the suspended players' salaries.

According to the policy: "When a player is suspended without pay for a violation of the Personal Conduct Policy, Policy and Program on Substances of Abuse or Policy on Performance-Enhancing Substances, the club that employed the player at the time of the violation will be required to remit to the Management Council a portion of the player's salary that is deemed forfeited by virtue of his suspension. The collected funds will be used to support the steroid and drug policies, the Player Care Foundation, and other research and player engagement programs."
Related topics:
sportsespndemarcus lawrencerandy gregorynflrolando mcclaindallas cowboys
Copyright © 2022 ESPN Internet Ventures. All rights reserved.
TOP STORIES
Fights break out after person sprays mace at SF Pride crowd
Watch ABC7's coverage of SF Pride Parade and Celebration
PHOTOS: San Francisco Pride Parade and Celebration 2022
US basketball star Brittney Griner due in Russian court
Evacuation lifted after fire burns close to homes in Albany
SF Pride Parade returns big after pandemic pause
3 dead, 2 injured after car, Amtrak train collide in Brentwood
Show More
Biden signs landmark gun measure, says 'lives will be saved'
SF's Dyke March makes celebratory yet somber return
Allies in Action: Embracing LGBTQ+ Families
SF police urge Pride attendees to remain vigilant
Trans March returns to SF after 2-year hiatus
More TOP STORIES News