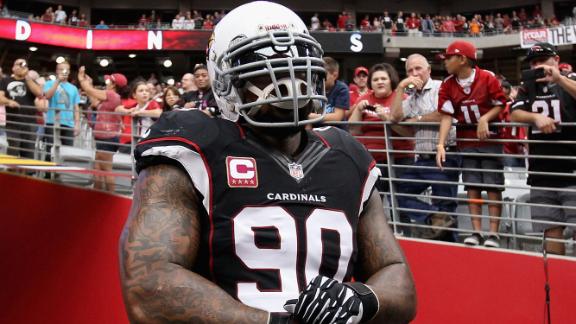 The 33-year-old defensive tackle was entering the final year of his contract. His release saves the Cardinals $6.8 million in cap space with free agency starting in less than two weeks. He was scheduled to earn $6.8 million this season with a $9.8 million cap hit.

"We have been very clear about our feelings for Darnell and our desire to have him back," Cardinals general manager Steve Keim said in a statement Friday. "After speaking with him and his representatives, we decided that this move today makes the most sense for both the team and the player and allows each to keep all of its options open."

Dockett missed all of the 2014 season after tearing his ACL during training camp last August. He played in 158 games as a Cardinal, amassing 462 tackles, 41 sacks and four interceptions since getting drafted in the third round of the 2004 draft and was a three-time Pro Bowler selection.

During his rehabilitation, Dockett has used Twitter as a means to update his progress, tweeting five days ago that he's predicting he'll be named the NFL's comeback player of the year.