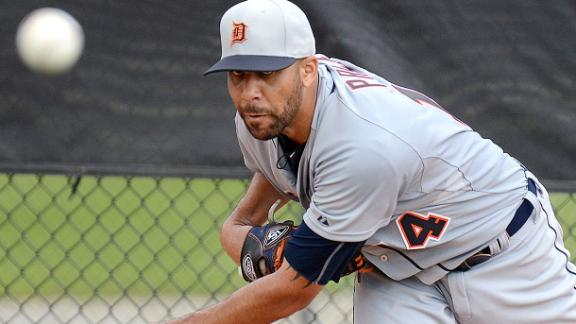 David Price will start in the rotation ahead of Justin Verlander and get the ball on Opening Day, Detroit Tigers manager Brad Ausmus said Friday.

Price, who went 15-12 with a 3.26 ERA last season, will start against the Minnesota Twins on April 6. Verlander will pitch the second game of the season.

"It is a tough decision when you have two guys like that," Ausmus told reporters in Lakeland, Florida."Looking at it from a baseball perspective, I felt this was the [right] decision and it wasn't an easy decision. ... I have to make a decision based on baseball and what is best for the 2015 Tigers."

Detroit acquired Price in a deadline deal in July, and the move paid dividends when the left-hander held Minnesota scoreless in a division-clinching victory on the final day of the regular season. Detroit won the AL Central for a fourth consecutive year.

Verlander had started on Opening Day for the past seven seasons for the Tigers.

"Ver was great, he actually was," Ausmus told reporters. "He was -- I don't know how else to describe it other than he was great. No one wants to be told they are not starting Opening Day when they are certainly a viable candidate."

"I hope a year from now that Justin Verlander has the type of year where he has to pitch Opening Day," Ausmus said. "And my gut tells me that he's going to be light-years better than what we saw in 2014 when he was coming off that core surgery. He's going to be a lot better."