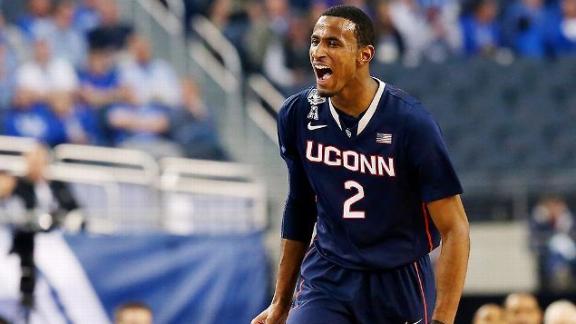 UConn junior forward DeAndre Daniels is heading to the NBA draft, but guard Ryan Boatright will return for his senior season, the school announced Friday.

Daniels, a 6-foot-8 California native, averaged 13 points and six rebounds this past season, then stepped it up during the Huskies' run to the national title.

"I just felt like this was the right time for me," Daniels said in a statement. "I sat down with my family and we discussed it and everyone agreed, but the final decision was still mine and it was hard. I had a great career at UConn and I wouldn't change it for the world, and to go out on top like we did makes it even better."

He had 27 points and 10 rebounds in a Sweet 16 win over Iowa State, and 20 and 10 in the Huskies' national semifinal victory against overall top seed Florida.

According to multiple NBA executives, Daniels might be taken late in the first round of the June 26 draft but is more likely to be selected somewhere in the first half of the second round.

"DeAndre has made an enormous contribution to the success we have enjoyed at UConn, both on the court and in the classroom," UConn coach Kevin Ollie said in the statement. "Besides being an outstanding basketball player, he is a quality young man. We wholeheartedly support the decision he has made and wish him nothing but success as he moves ahead with his basketball career. He will always be part of our UConn family."

The news of Daniels' departure was earlier reported by Yahoo! Sports.

Boatright averaged 12.1 points, 3.4 assists and 3.5 rebounds this past season.

Information from ESPN's Andy Katz and Jeff Goodman was used in this report.