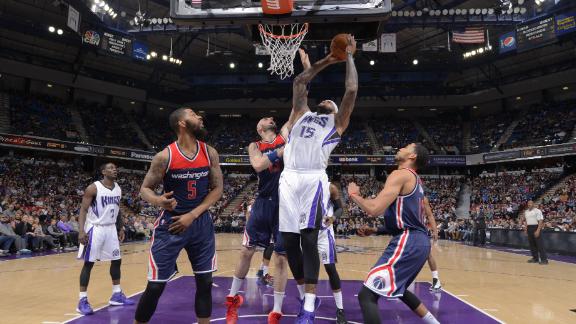 The Sacramento Kings clinched their first 30-win season in eight years on Wednesday, but in continuing what has been a strange season for the team, the final seconds of the victory were clouded in controversy and tarnished by technical fouls.

DeMarcus Cousins and Rajon Rondoeach received technical fouls for sarcastically clapping at an official's call in the waning moments of a 120-111 win over the Washington Wizards.

For Cousins, it was his 16th technical foul of the season and will automatically earn him a one-game suspension.

The sarcastic claps occurred after the Kings were called for a five-second violation with 6.7 seconds remaining in the game and the Kings up by 14 points. Rondo, who was called for the violation, drew a double technical at the same time and was ejected.

"They said it was a violation and we clapped," Cousins said in a postgame courtside TV interview. "I guess they didn't like that."

If Cousins' technical foul is upheld, the Kings would be without him for Friday night's home game against the Miami Heat.

Rondo and Cousins get techs for mocking ref
After a delay of game call on the Kings, Rajon Rondo and DeMarcus Cousins sarcastically applaud the referee's call and get awarded two technical fouls with six seconds remaining against the Wizards.