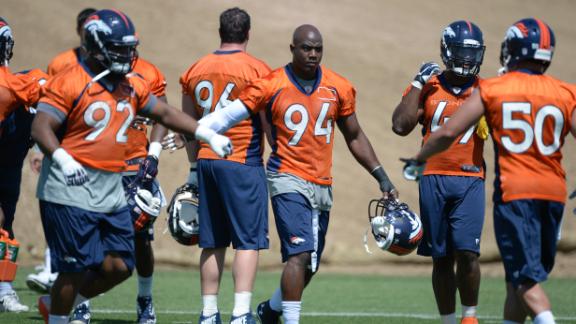 Thomas, who led the Broncos in receptions, receiving yards and touchdown catches last season, is scheduled to make approximately $3.27 million in 2014 -- the final year of his rookie contract.

Although the financial terms of Denver's offer are unknown, Thomas likely will become one of the NFL's richest receivers with his next deal. Detroit's Calvin Johnson, Arizona's Larry Fitzgerald, Seattle's Percy Harvin and Miami's Mike Wallace all have signed lucrative contracts in recent years -- deals worth at least $12 million annually.

Broncos president and general manager John Elway stated earlier this offseason that Denver would prefer to sign Thomas and Pro Bowl tight end Julius Thomas to contract extensions prior to the start of training camp next month.

The Broncos have started contract talks with Julius Thomas but have not formally offered a deal yet, according to multiple reports.

Demaryius Thomas, 26, has emerged as one of the NFL's elite receivers since Peyton Manning's arrival in Denver prior to the 2012 season. The two-time Pro Bowler had 92 catches for 1,430 yards and 14 touchdowns last season for the AFC champion Broncos -- his second consecutive season with at least 90 catches, 1,400 yards and 10 touchdowns.

The 6-foot-3 Demaryius Thomas figures to see an even more prominent role in 2015 due to the departure of receiver Eric Decker, who signed as a free agent with the New York Jets following back-to-back seasons of 1,000 yards and 10 touchdowns.

Julius Thomas, who is scheduled to make $645,000 this year, had a breakthrough 2013 season after emerging as Denver's starting tight end, finishing with 788 yards and 12 touchdown catches en route to his first career Pro Bowl appearance.

Broncos Back To Work
Jeff Legwold discusses where the Broncos need to focus on each side of the ball during minicamp.