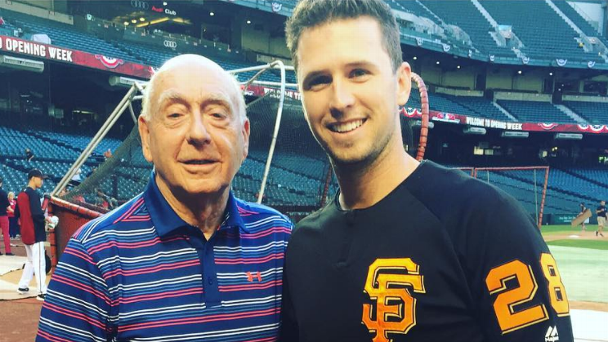 The highlight of Dick Vitale's year wrapped up Monday night when the Gonzaga Bulldogs and North Carolina Tar Heels faced off in Glendale, Arizona, for the NCAA men's basketball national championship.

But Vitale, an ESPN college basketball analyst for the past 38 years, didn't skip town after the buzzer sounded at University of Phoenix Stadium. Instead, he stuck around the desert for a few days and attended an Arizona Diamondbacks home game against the San Francisco Giants on Wednesday.

Vitale, 77, received the opportunity to walk around Chase Field before the game and spent some time analyzing players from both teams for the Diamondbacks' Twitter account. He warned that the "Diamondbacks better be ready" for Giants starting pitcherMatt Moore, someone Vitale -- a Sarasota, Florida, resident -- followed closely when Moore pitched for the Tampa Bay Rays from 2011-2016.

Vitale then chatted up Giants pitcher Jeff Samardzija, calling him "one of the greatest athletes ever to play at the University of Notre Dame." Samardzija played baseball and also was a wide receiver for the Fighting Irish football team before deciding to pursue a professional career on the diamond.

Vitale made more rounds by shooting the breeze with Giants catcherBuster Posey and fellow ESPN broadcaster Dave Flemming, who works as a play-by-play announcer for San Francisco.

While it's clear Vitale loves college basketball, the man is also a big fan of other sports beyond the hardwood, baby.