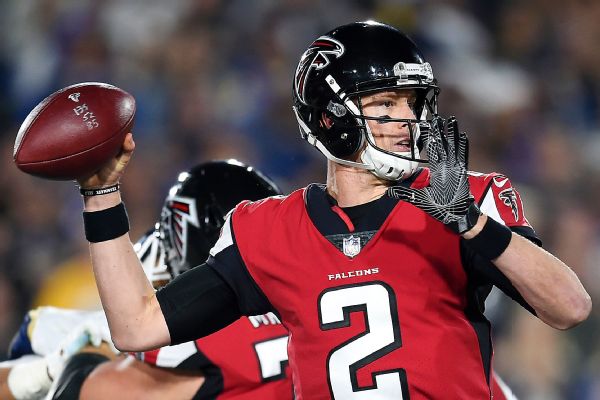 Ryan is in the final year of a five-year, $103.75 million extension and is due $19.25 million in 2018. There was talk of the the Falcons completing the extension before the start of free agency to free up more cap space, but that never materialized. Ryan's 2018 cap number currently is $21.65 million.

"There's no time frame on it right now,'' Dimitroff told reporters gathered at Georgia's pro day. "I think the biggest thing for [Ryan's representation], at one time, was probably waiting to see what was going on in the market. That's kind of come and gone now, right? So we'll continue to talk about how to get it finalized.''

Dimitroff has kept contact with Ryan throughout the process, although the actual negotiating has been between Dimitroff and agent Tom Condon.

"With agents, we're very mindful: We don't want to muddy the waters,'' Dimitroff said. "Ultimately ... [Ryan's] a team guy. There's no illegalities about talking to Matt Ryan -- myself or Dan Quinn. Of course we've had a talk here or there about the future. But as far as getting involved and trying to push wedges into a negotiation, no, because we have a good working relationship with Tom Condon and CAA. So I'm not concerned about that.

"As far as the discussions with Matt, again Matt knows what this team is about and he knows what he can do for this team at a number of levels. He knows that he's right up against a third contract in the NFL, and those are big contracts and significant discussion points. And he's very aware of that. And he's aware of everyone on the team being aware of it. He doesn't want to be a distraction. That's him. Ultimately, he's a team guy through and through. Again, hopefully we can move through this and get this done.''

When pressed on how close the team is to reaching a deal with Condon, Dimitroff said, "I don't know how close we are on it. We talk about it and it seems like things are right around the corner and understand that there's no real rush on it right now. ... It's not like we're worried about free agency. The only rush on it is getting everyone comfortable so that we can continue to focus on the upcoming season.''

The quarterback market saw Kirk Cousins move into the top spot in terms of average salary per year at $28 million with the Minnesota Vikings, whileJimmy Garoppolowas bumped up to $27.5 million per year with the San Francisco 49ers. Detroit Lions' Matthew Stafford is at $27 million per year off last year's extension, while theNew Orleans Saints' Drew Brees is fourth on the list at $25 million per year after a recently negotiated two-year deal.

Cousins' deal was for three years with $84 million guaranteed, while Garoppolo's was a five-year deal with $74.1 million guaranteed. TheGreen Bay Packers' Aaron Rodgers is expected to sign a new lucrative deal before the start of the season and could become the first at $30 million per year, while Ryan seems likely to be a shade under.

"I think all of the market will factor into how we do Matt and how we approach Matt, there's no question about that,'' Dimitroff said. "If I were to state the significance of it, I think it's just a piece of the pie. His representation is looking at it and, of course, we're looking at it through a different lens. We're always mindful that we're aware of everything else. But like I said before, from an analytical standpoint and a statistical standpoint and a financial standpoint, we know that it ultimately comes back to what we're doing with this organization and what we deem as a win-win for both parties.''
Report a correction or typo
Related topics:
sportsespnthomas dimitroffminnesota vikingsnew orleans saintsatlanta falconsdetroit lionskirk cousinsmatt ryangreen bay packersaaron rodgerscontract extension tom condonsan francisco 49ersmatthew staffordnfldrew brees
Copyright © 2022 ESPN Internet Ventures. All rights reserved.
TOP STORIES
EXCLUSIVE: Mom reacts to murder charge in daughter's overdose
2 cases of omicron sub-variant BA.2 detected in Santa Clara Co.
7-year-old SF girl and mom pray for miracle to avoid eviction
Bay Area Frenchie reunited with owner after gunpoint robbery
SJ becomes 1st in US to require gun liability insurance
Man denied heart transplant because he has not received COVID vaccine
Wealthy Bay Area city pushes back against new housing proposal
Show More
Apple CEO allegedly stalked by woman who showed up at house
Surging food prices starting to lose steam
San Mateo Co. officials vow PPE debacle will never happen again
How to get free N95 masks from pharmacies, community health centers
Bay to LA rivalry: Bragging rights at stake in NFC title game
More TOP STORIES News