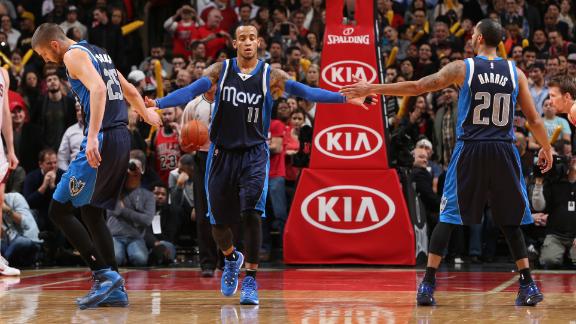 The Bulls had a three-point lead and a foul to give when the Mavs got the ball with 4.2 seconds left, but Hinrich waited too long to commit the foul, hacking Dallas guard Monta Ellis as he began the motion of flinging up a desperation 28-foot runner. Ellis hit all three free throws to extend the game.

Hinrich admitted that it was "a bonehead play." Nevertheless, Nowitzki regretted his comment about "one of the dumber fouls I've ever seen" received so much attention.

"I didn't mean to put my man Kirk on the spot like that, because he's a good dude," Nowitzki said Wednesday night before the Mavs' 107-105 win over the Milwaukee Bucks, a game in which he didn't play due to precautionary rest. "He's a hard-nosed player. He made two 3s right before that actually to put them in position to win, so I have nothing but respect for Kirk Hinrich. I didn't mean to really get it out like that."

Nowitzki called Hinrich, a 12-year veteran, "my guy" and said they've gone out to dinner together on several occasions. Nowitzki wished he would have chosen his words more carefully regarding the foul.

"I feel bad for saying it," Nowitzki said. "I should have maybe phrased it different, maybe say it wasn't the smartest play I've ever seen. I mean, he knows. Kirk's been around for a long, long time and has been a great pro in this league. You think of a play like that, you think more of a younger guy fouling that late, but we'll take it. We got very fortunate to come back and win."

Hinrich, speaking after the Bulls' 102-95 win at Charlotte on Wednesday night, said he hadn't even seen Nowitzki's comments.

"I didn't even know what he said 'til somebody said it to me today right before the game," Hinrich said. "It is what it is ... I can't argue with him. It was a dumb play. Just try to move on and try to do better in the future."

Hinrich, who scored six of his 12 points in the fourth quarter, was happy to bounce back after Tuesday night's tough defeat.

"I think you just realize through time in this league you have to move on," Hinrich said. "Things are going to happen, you're going to make mistakes, you try not to. The hardest thing is when the game's over and you lose like we did [Tuesday] night, when you feel like you let your teammates down. That's the hardest thing about it and getting past that, but I've got great teammates. Everybody's been trying to, I guess, pick me up. I'm just happy to get this one tonight."

The Bulls were clearly happy to pick up this win after Hinrich's error on Tuesday night.

While Noah brushed off a question if he was referring specifically to Hinrich, his answer, and the way in which teammates celebrated Hinrich's good plays on Wednesday, were more than enough proof.

"It was for his hood, though. It wasn't for him, it was for Kirk's hood,"Noah said.

Information from ESPNChicago.com's Nick Friedell was used in this report.