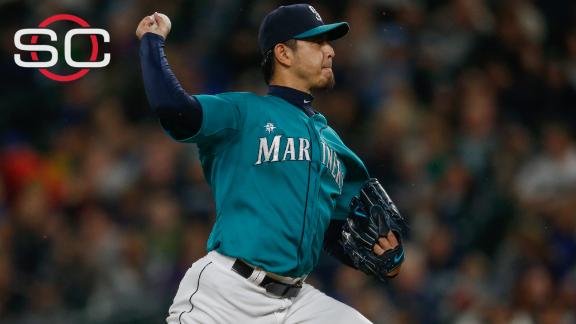 LOS ANGELES -- An agreement between the Dodgers and free-agent pitcher Hisashi Iwakuma is in jeopardy after the team reviewed the right-hander's physical, according to a source, but the sides are continuing to talk in hopes of bringing him to Los Angeles.

The Dodgers and Iwakuma first struck a deal Dec. 6, a pact reportedly for three years and roughly $45 million.

The Japan-based Jiji Press first reported earlier Thursday that the Dodgers were backing away from the deal after evaluating the results of Iwakuma's physical.

The medical issue revealed by Iwakuma's physical is not yet known.

Sources told ESPN's Jim Bowden that the Seattle Mariners, who Iwakuma spent the past four seasons with, are now back in pursuit of the pitcher.

Teams have been known to rework contracts after something turns up in a physical. The Boston Red Sox, for example, renegotiated a three-year, $39 million deal with Mike Napoli in 2013 after his physical revealed a hip condition. He later signed a one-year, $5 million deal.

If the Dodgers lose Iwakuma, they would not have to forfeit their No. 25 overall draft pick in June.

Iwakuma rejected the Mariners' $15.8 million qualifying offer in November, prompting the team that signs him to surrender its pick.

The Dodgers continue to look for help in their rotation, which now includes Clayton Kershaw, Brett Anderson, Alex Wood and, they hope, Hyun-Jin Ryu, who is coming off May shoulder surgery.

The team swapped three prospects for three other prospects in a three-team deal with the Cincinnati Reds that sent All-Star third baseman Todd Frazier to the Chicago White Sox on Wednesday.

That deal could be the precursor to a larger trade. The Dodgers reportedly have been linked to the Miami Marlins' Jose Fernandez among other young pitchers.