Dodgers' Yasiel Puig out of lineup 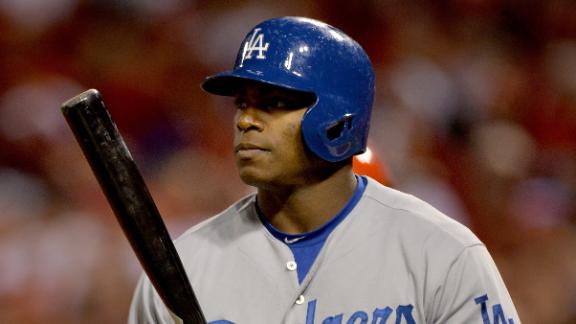 Puig struck out in seven consecutive at-bats before his sixth-inning triple Monday night, falling one strikeout shy of the postseason record. The Dodgers are concerned that Puig has been reacting to being hit by an Adam Wainwright pitch in Game 1 -- and being brushed back in Game 2 -- and was trying too hard to even the score.

"What can I do? I wasn't in the lineup," Puig said through an interpreter. "That was a decision they made. Whether it was the manager's decision or anyone, they made that decision.

"Now it's my responsibility to be supportive from the dugout."

Puig is 3-for-12 with four runs scored in the series. He went 5-for-22 with 10 strikeouts against the Cardinals in the NL Championship Series last year.

"I can't tell you that [Puig] is not confident or that he's overly confident or anything," Mattingly said. "So, that's a question for him. But this is, really, nothing more than feeling like this gives us a better chance to win today. It's not anything bad with Yasiel."

Puig, who led the Dodgers with an .862 OPS this season, said he's not upset with being benched, but when Mattingly put his arm around him behind the cage during batting practice and tried to talk to him, Puig never turned his head. Mattingly patted him on the back and walked away.

"Obviously I haven't been hitting against St. Louis," Puig said through an interpreter. "It's about winning the game, about putting the guys out there that he thinks can help us win the game."

Teams have made a habit of brushing back Puig, and, at times, hitting him with pitches. He was hit by 12 pitches, double the total of any other Dodgers player. He also led them in being hit by pitches last year despite not coming to the major leagues until June.

One scout said the book is to throw up and in on Puig early in series to make him swing at off-speed pitches outside the strike zone.

"[Puig] has been one of our best players," Dodgers closer Kenley Jansen said. "So, you've just got to let him ride, and I think he's going to pull it together."

Ethier scarcely played once the Dodgers went to their set outfield of Puig in center, Matt Kemp in right and Carl Crawford in left. He had just 18 at-bats in September and batted .249 with four home runs on the season.

Benching Puig Best Chance For LA To Win
Dodgers manager Don Mattingly says benching OF Yasiel Puig for Game 4 of the NLDS gives us the best chance to win today.

Puig Out Of Lineup For NLDS Game 4
Doug Glanville discusses Dodgers OF Yasiel Puig's struggles at the plate and manager Don Mattingly's decision to bench Puig for Game 4 of the NLDS.