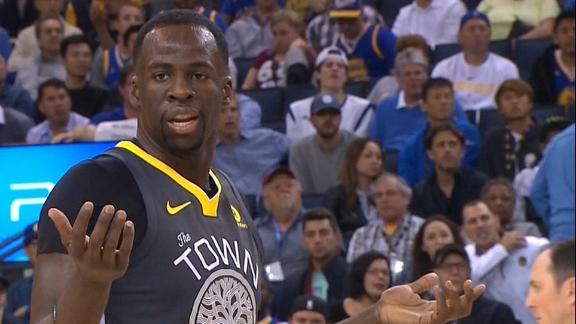 OAKLAND, Calif. -- Golden State Warriors forward Draymond Green picked up his second technical foul of the night in the fourth quarter, earning an automatic ejection in Tuesday's 125-105 loss to the Oklahoma City Thunder.

Referee Marat Kogut called Green for an offensive foul with 8:13 left, and Green tossed the ball in the officials' direction. The referee behind Green, Ken Mauer, tagged Green with the technical foul to send him to the showers early.

Green appeared to be surprised by the call and waved his hands at the officials in disbelief as he left the court, leading Russell Westbrook to get up from the Thunder's bench, point toward the Warriors' locker room and begin clapping.

Green was hit with his first technical at the end of the first half when he argued with official Lauren Holtkamp, complaining that he was hit in the mouth by Westbrook.

Head coach Steve Kerr, upon seeing that Green's mouth was bleeding, walked to the scorer's table to speak with Mauer instead of going straight to the locker room. The conversation lasted about five minutes.

"At halftime, I was asking Kenny if he was allowed to look at that play," Kerr said. "I didn't know the rule, so I was just looking for clarification because Draymond came off the floor with a bloody mouth. So I asked Kenny if they were allowed to look at it afterwards."

After the game, Green declined to speak with reporters.

"Nah, I'm going to save my money," he said with a smile to ESPN before exiting the arena.

The All-Star forward leads the NBA with 13 technical fouls this season, two more than teammate Kevin Durant, Westbrookand Charlotte Hornets center Dwight Howard, who are tied with 11 each. Golden State has by far the most ejections this season with nine, of which Green has three; the Houston Rockets, New Orleans Pelicans, Phoenix Suns, Toronto Raptors and Washington Wizards are tied for second with three each.

The Warriors were miffed with some of the calls Tuesday evening but one stood out.

In the third quarter, Westbrook drove to the basket and tripped over his own feet before collapsing to the hardwood. Holtkamp called a foul on Andre Iguodala.

The fans in Oracle Arena began chanting, "Ref, you suck."

Also, in the first half, players were perplexed when Holtkamp called a goaltending violation on Durant after it appeared he got a clean block on Westbrook.

Stephen Curry was asked about Tuesday night's officiating and the player-referee relationship dynamic.

"It was a rough night," he said. "But if we honestly are going to say they're the reason we lost the game tonight, I think that's off. We've got to look ourselves in the mirror and see what we can do to control the game, because we know that's stuff that we can't control. As much as we want to complain in the moment or try to argue with the refs about what they should have seen and calls not going our way, as we go down the stretch of the season and in playoffs, if that's something that's going to get under our skin consistently and impact our performance, we're going to be in trouble.

"But I've got faith that we can overcome a tough night with the whistle and still be who we are. But, tonight was a rough one."

"The game had nothing to do with the officials," Kerr said. "They missed calls, but we were way worse than the officials were. We got completely outplayed."

Draymond ejected after second technical
After being called for an offensive foul, Draymond Green tosses the ball in the direction of referee Marat Kogut and is assessed his second technical by referee Ken Mauer.

Draymond gets ejected in loss to Thunder
Draymond Green yells in a referee's face then later tosses a ball in the direction of another referee and gets ejected.
Report a correction or typo
Related topics:
sportsespntechtechnical foulgolden state warriorsdraymond greenejectednbatossed
Copyright © 2020 ESPN Internet Ventures. All rights reserved.
More Videos
From CNN Newsource affiliates
TOP STORIES