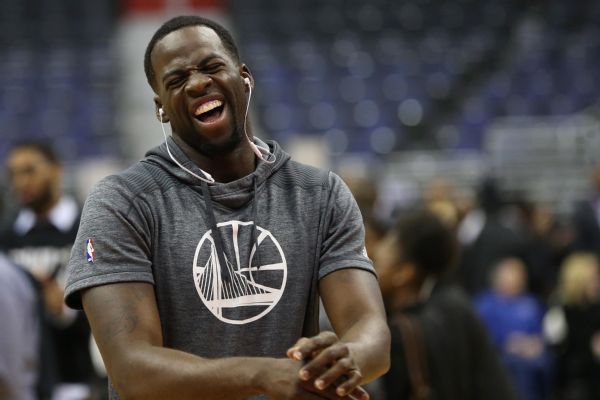 DENVER -- Golden State Warriors forward Draymond Green acknowledged Saturday that he has read Dallas Mavericks owner Mark Cuban's remarks about him, but he elected not to comment further on the matter.

Asked if he was advised not to address Cuban's comments to ESPN, Green responded: "Nobody can prep me. I'm going to always say what I want. Ain't no prepping me. At all. Ever. Don't ever believe that. Can't prep me for nothing. Don't ever think that.

"I do live in America. However, you can't prep me for nothing. Don't ever think I've been prepped for an interview. Don't work like that."

A day earlier, Cuban told ESPN's Tim MacMahon that Green "owes the NBA an apology" after suggesting in an Instagram post last week that the word "owners" be banned from professional sports.

Wrote Green: "For starters, let's stop using the word owner and maybe use the word Chairman. To be owned by someone just sets a bad precedent to start. It sets the wrong tone. It gives one the wrong mindset."

Cuban then responded: "For him to try to turn it into something it's not is wrong. He owes the NBA an apology. I think he does, because to try to create some connotation that owning equity in a company that you busted your ass for is the equivalent of ownership in terms of people, that's just wrong."

Two of Green's teammates spoke in his defense Saturday before the Warriors' game against the Denver Nuggets.

"I understand both sides," Andre Iguodala, the vice president of the National Basketball Players Association, told ESPN. "I think Mark Cuban has the right to defend himself because he has a majority stake in an NBA team. But he's done a great job of carrying that position with integrity, with respect, with equality to everyone who's involved with his organization. So, I understand because he's removed himself so far from the other incident that owners have gotten themselves in trouble with references to American historical events. So, I understand that he has to defend himself, but at the same time, he's not able to understand what it's like to be an African-American and certain terms being thrown around and how we feel about them."

Iguodala did not use the word "owner" when describing that position during the interview.

Michael Jordan (Charlotte Hornets) and Vivek Ranadivé (Sacramento Kings) are the only two non-white majority owners in the NBA. ESPN reached out to both for comment through their representatives, but had yet to receive a response prior to publishing.

There are no black owners in the NFL or MLB.

"Cuban, I guess he's a little sensitive about that comment," West told ESPN. "I don't think it's nothing wrong with the idea that people [should] make it clear that you don't own the player, you don't own the individual people. You own the enterprise."

Iguodala pointed out a double standard that exists when conversing about one's inequalities.

"It's the same as if we said a derogatory statement toward somebody who represents the [lesbian, gay, bisexual and transgender] community," Iguodala said. "You have to be very careful with that, and any time you say something about that, you can get into real trouble. But, when it comes to us, [people] just want to say it's about race. You understand? There's an interesting two sides that goes with that. On one side, you've got to be very sensitive because they feel like they should be treated equally, but on the other side, we feel the same way, and it's not treated the same way. I understand both sides, but I do think Mark has done a great job at running his organization and making sure everyone, no matter your color, your gender, whatever it may be that's going on in our crazy world, that everybody is respected."

Iguodala is one of the most business-savvy players in the league; he is the tech circuit's central player when it comes to investing into the bevy of corporations in the Silicon Valley.

"Being an entrepreneur and having equity shares in a company, [being labeled an 'owner'] doesn't bother me," he said. "But I would like for any time that there's a situation where anybody in that position is out of line with how they view their employees in a certain manner should be handled accordingly, which the NBA has done a good job of. But players are always under the microscope with how we use our words and how we interact with people, and I think everyone else should be held to the same standard, especially from, whatever you want to call them, ownership."

Asked about his views on the "owner" label, West pivoted into how fatigued he was with the political landscape and how the negative tension has caused chaos around the country.

"I don't know, man. I'm going to be honest with you. I'm drained, bro. I'm drained. I'm mentally drained," he said. "I'm a thinker, so my mind is fried. I've been fried for about a month. I'm drained. I've got no answers. ... If you try to think logically and use sound rationale with this madness, it just drives you crazy. There's no way to put into words, some of the stuff that we're dealing with."
Report a correction or typo
Related topics:
sportsespnmavsgolden state warriorsdallas mavericksdraymond greendavid westmark cubangswnbaandre iguodala
Copyright © 2020 ESPN Internet Ventures. All rights reserved.
More Videos
From CNN Newsource affiliates
TOP STORIES