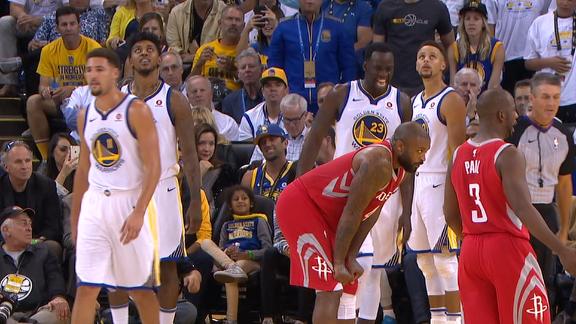 Toward the end of the third quarter, Green was fouled during a running jumper and landed awkwardly. He immediately began hobbling and rubbing his left knee. Moments later, the quarter buzzer sounded, and he retreated to the locker room.

Green told ESPN's The Undefeated on Tuesday night that his knee was "very sore." He was able to walk under his own power and said he didn't think the injury was major.

Green is getting an MRI on his left knee Wednesday.

"He was the guy who was bringing the energy and the life," coach Steve Kerr said. "We didn't have much energy from most of our group tonight. ... When you are lacking conditioning, like we are right now, you have to have high-energy guys out there. As soon as he went out of the game, things went south for us. We just couldn't get any traction."

Green hobbles after missed shot
Draymond Green looks to be in pain after driving the lane and getting fouled by Trevor Ariza.
Report a correction or typo
Related topics:
sportsespnstrainkneegolden state warriorsdraymond greennba
Copyright © 2021 ESPN Internet Ventures. All rights reserved.
More Videos
From CNN Newsource affiliates
TOP STORIES
Lawsuit filed against Bank of America for unemployment fraud
Here's why seniors must wait for the COVID-19 vaccine