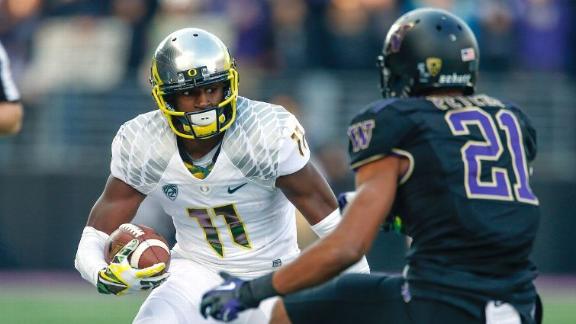 The Oregon Ducks have lost top returning receiver Bralon Addison to a torn ACL suffered Wednesday in spring practice, according to multiple reports.

Addison's knee injury could shelve him for the season, the reports said, leaving the Ducks with a void at the position. The team lost its No. 1 and No. 3 receivers in Josh Huff and Daryle Hawkins, who were seniors in 2013.

Addison had 61 catches for 890 yards with seven touchdowns last season, when Oregon's top four receivers accounted for 72 percent of the receiving yardage and the season receiving touchdown total.

But Addison was the only player of those who was to return.

Oregon was hoping he could use that experience not only to step up as a player but also lead the other younger receivers.

Senior Keanon Lowe also returns. He played in 12 games and started three for the Ducks but averaged just 19.4 yards per contest.

Oregon was ranked No. 9 in the last Associated Press Top 25 poll of the season. The Ducks finished 11-2 after a 30-7 win over Texas in the Valero Alamo Bowl.