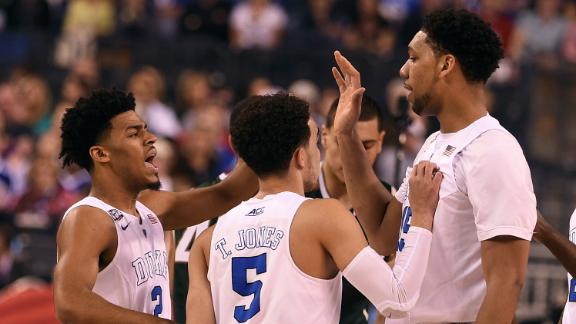 The Wisconsin Badgers were a consensus 1-point favorite over the Duke Blue Devils on Monday morning to win the title game Monday night, the smallest point spread in a men's national championship game in the past 20 seasons.

The early money was on the Badgers. The MGM sportsbook said Sunday that two times more money had been bet on Wisconsin than Duke, causing the line to move off the consensus opener of pick 'em to the Badgers being small favorites.


If the line holds, the Blue Devils will be underdogs for the fifth time this season. Duke won all four previous games as underdogs this season, including at Wisconsin on Dec. 3. The Blue Devils beat the Badgers 80-70 as 4-point underdogs.


It's only the fourth time the Blue Devils have been underdogs in the past 20 NCAA tournaments, according to ESPN Stats & Information. Duke lost its previous three tournament games as underdogs.


Wisconsin outlasted Kentucky 71-64 Saturday to advance to the championship game. The Badgers' upset of the previously unbeaten Wildcats saved the William Hill sportsbook from its biggest loss on a prop bet in the company's three-year history in Nevada.


The MGM took three six-figure bets on the semifinals: one on the Badgers, one on the Kentucky money line and one on Duke.


The Blue Devils easily covered the 5.5-point spread in an 81-61 rout of Michigan State. Duke's win cost a Las Vegas casino owner a shot at $1 million.


As of Monday morning, the over/under total for the title game was sitting at 140. The MGM said Sunday that the action was balanced on the total.

Why Duke will win
C.L. Brown makes the case for why Duke will beat Wisconsin to win the national championship.