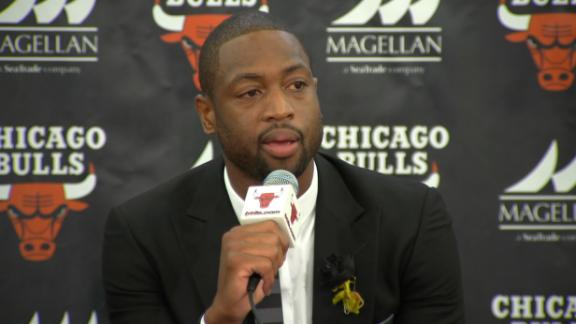 Dwyane Wade was introduced Friday in Chicago as a member of the Bulls and made it clear that this is Jimmy Butler's team.

After 13 years with the Miami Heat, Wade signed a two-year, $47 million contract to return to the city in which he was born. Wade took the stage Friday with Bulls general manager Gar Forman, and the second question he was asked was about Butler, the team's 26-year-old star.

Wade was asked was how the three would fit together.

Wade recalled what happened back in 2004, when Shaquille O'Neal was traded to Miami in the offseason.

"We had no championships at the time and I remember his press conference," Wade said. "I was playing in the Olympics at the time, like Jimmy is right now. And I remember Shaq said, 'We're not going to go through this all year. This is Dwyane Wade's team.'

"So, we're not going to go through this all year. This is Jimmy Butler's team. Myself and Rondo are here to bring what we bring as athletes to this team and to this city. He's the young Bull on this team. He's a 26-year-old who can play 40 minutes if coach wants him to and maybe more. I ain't trying to do all that. And we're going to depend on him a lot."

Wade said a phone call he received from Butler was key in his decision to pick Chicago.

"I've known him since Marquette," said Wade, who also played for the Golden Eagles. "I have tremendous respect for him. This would not have happened if it hadn't been for Jimmy Butler. That was huge.

"At the time, I didn't know it. Derrick Rose leaves, (Joakim) Noah leaves. To want to bring in a guy like myself, it shows what Jimmy's about: It's winning. We all play together with one common goal: to win. Jimmy is going to grow and become a better player because of what Rondo brings and what I bring."

Wade also talked about his exit from Miami, saying, "I have no rift with (president) Pat Riley. This year, the direction of that organization was a little different than it was in years' past."

"I had a contract offer from Miami. It was my decision to be selfish and live out a dream of mine (of playing for the Bulls)," Wade said. "This was a decision solely for me. It has nothing to do with Pat Riley or (Heat owner) Micky Arison. I wanted to be a part of building this organization back up."

However, when asked about Riley's role in negotiations, Wade said, "I dealt with Micky Arison, my contracts the last two years. He didn't sit at the table. He didn't call or email or text."

Wade said he was excited to return to the city in which he was born.

"I'm thankful to be here today. This is one of those moments that is a dream come true. Simply that. I'm a Chicago guy, a Chicago kid. I remember sitting on the floor and watching the Chicago Bulls win their first title. I was 9 years old, watching on an itty bitty TV, and I said, 'That's what I want to do, that's who I want to be.

"My dream of being an NBA player started here in my hometown. Took a long time to get here, but I'm here."

Some other notable quotes:

-- Wade was asked about his wife, Gabrielle Union, who was in attendance. He warned reporters about her social media activity. "I'm gonna warn you all, she's gonna follow all you guys and she's gonna comment on what you say.''

-- Wade recalled his two visits with the Bulls in 2010, when he was a free agent. "They gave me a jersey. I went home, put it on, took a picture. Killed the picture."

Wade returned to Miami that offseason to play with LeBron James and Chris Bosh.

--- Wade was asked about the Bulls' style and whether he expected his team would emulate the Warriors' 3-point shooting game. "As much as my son loves Stephen Curry, sorry, he's not your dad. I am."