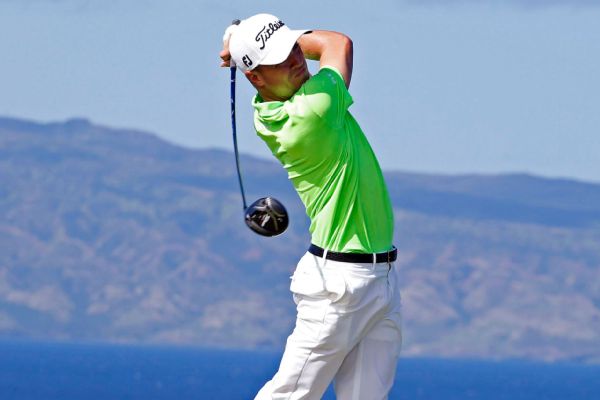 HONOLULU -- Fresh of his victory in Maui, Justin Thomas became the seventh player to join the "59 Club'' on the PGA Tour when he made a 15-foot eagle putt on his last hole Thursday at the Sony Open for an 11-under 59.

Thomas thought his hopes at a 59 were over when his drive on the par-5 ninth hole at Waialae Country Club was a foot from clearing a fairway bunker on the left and rolled back into the sand. He figured he couldn't reach the green until realizing Daniel Berger hit a 4-iron from the bunker onto the green.

Thomas figured "this wasn't a time to lay up.''

He hit his 5-iron clean and pure, and it settled 15 feet below the cup. Wasting little time over the putt, he sank it for a 59 and lightly pumped his fist. The excitement came from Berger and Jordan Spieth, and only when Thomas looked at their reaction did it begin to sink in.

"I got more excited from seeing them get excited,'' he said.

Jim Furyk was the last player with a sub-60 round when he closed with a record 58 at the Travelers Championship last summer. Furyk also had a 59 in 2013 at the BMW Championship, joining the exclusive group that includes Al Geiberger (1977 Memphis Classic), Chip Beck (1991 Las Vegas Invitational), David Duval (1999 Bob Hope Classic), Paul Goydos (2010 John Deere Classic) and Stuart Appleby (2010 Greenbrier Classic). Thomas is the youngest to ever accomplish the feat.

This was special because he made it look so easy.

Thomas, a 23-year-old with enormous power for his 145-pound frame, never hit more than a 7-iron into the par 4s at Waialae on a perfect day for scoring -- very little breeze, fast fairways and soft greens. That 7-iron was chipped under the trees and into a bunker on No. 8 when he was trying to save par.

His only bogey came on his second hole, the par-3 11th, when his tee shot went into a bunker and he missed an 18-foot par putt.

Spieth, best friends with Thomas since they were 13, was more nervous than Thomas and far more demonstrative. Thomas had a 30-foot birdie putt on No. 7 that looked good even when it was inches from the cup until burning the edge. Spieth clutched the back of his neck and was still asking how the putt didn't fall when he walked onto the next tee. He was talking to himself, of course. He gave Thomas his space.

"It's like sitting on the bench with a teammate throwing a perfect game,'' Spieth said. "It was awesome. What an awesome last five rounds he's had.''

Just four days ago, Thomas closed birdie-birdie for a 69 to win the SBS Tournament of Champions at Kapalua, rising to a career-high No. 12 in the official world golf rankings. He started his round Thursday at Waialae by pitching in from 35 yards for an eagle on the short 10th hole. And he was off.

"All my birdies were easy,'' Thomas said.

He was smashing drives when he could, especially on the par-5 18th hole when he found an extra long tee and hammered a high hook that left him only an 8-iron into the green. He narrowly holed that for eagle, settling for a 29. Then, he went birdie-birdie to start the front nine, and when he hit a 7-iron to 5 feet for birdie on the par-3 fourth hole, the race was on to hit golf's magic number.

"He had full control of his golf swing,'' Spieth said.

Spieth and Berger were along for the ride. They all graduated high school in 2011 and grew up in junior golf. They were together a few weekends ago at a resort in Maui ahead of the Tournament of Champions.

And they put on quite a show Thursday, with Spieth and Berger each shooting 65. On only three holes -- Nos. 15, 5 and 8 -- did someone in the group not make birdie or better. Their best-ball score was 17 under.

The best part for Berger and Spieth was standing to the side of the 18th green to watch Thomas get his share of history, and delivering. Berger raised his arms. Spieth gave it a left-handed fist pump.

"The coolest part for me was how excited they were for me on 18,'' Thomas said. "To do that with two of your best friends out here and two of your friends that you played with for so long ... those are people that I'm going to be playing with and hanging out with for the next 20, 25 years out here. I'll have that on them for now, but that was a lot of fun.''

Goydos was the only other player to shoot 59 in a first round. He was runner-up that year to Steve Stricker.

Maybe that's what allowed Thomas to keep his emotions in check. He said he thought about the 59 as he walked up to his final green.

"I'm like, 'If I make it, what am I going to do?' It's not like winning a tournament,'' Thomas said. You have three days left to try to play well.''

Even so, he was keenly aware of the feat. Thomas keeps a golf ball from all his victories dating to his days in junior golf. There will be special place for this one. His parents, Mike and Jani, walked the entire round with him. Mike Thomas already had the ball in his pocket. 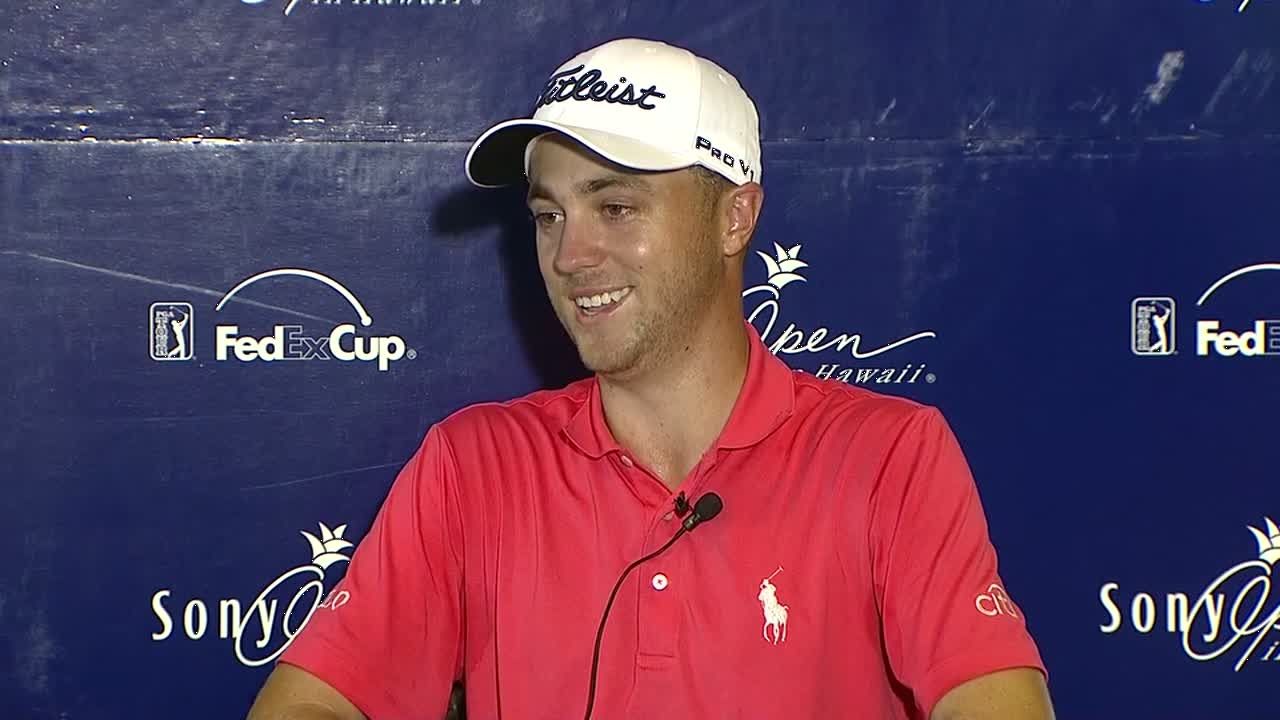