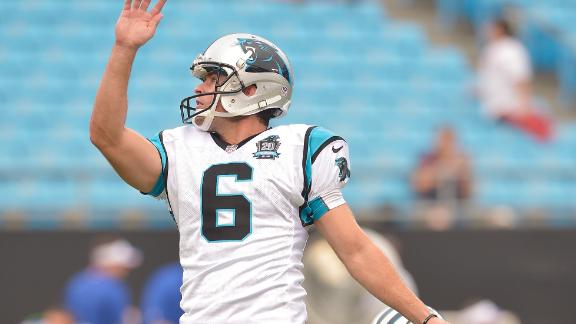 FLORHAM PARK, N.J. -- Reviews have been mixed around the league for the NFL's experiment with longer kicks on extra points.Regardless, it appears there's a future for them.Eight kicks from the longer distance -- usually 33 yards -- were missed during the first two weeks of the preseason. The 94.3 percent success rate (133 of 141) was below the regular-season rate (99.6 percent) from 2013 when the ball was snapped from the 2-yard line instead of the 15.Only five of 1,267 short kicks were missed in 2013.All of this summer's misses came with the ball snapped from the 15. Snaps will move back to the 2 this week and for the regular season.NFL officiating director Dean Blandino says he believes longer PAT kicks are "in the league's near future." The results this preseason will be brought to the competition committee, and a proposal for change almost certainly will be presented to team owners at next March's annual meetings.Blandino isn't sure the 15-yard line will be the focal point of any change.As with any alterations to the game, coaches and players offered a variety of viewpoints.San Francisco's veteran placekicker Phil Dawson didn't get a chance to try a long extra point because the 49ers didn't score any touchdowns in their first two exhibition games. He sees the positive and negative sides of a longer kick."It could rear its head in a game where the kicker hasn't been on the field in a while," Dawson said. "It's hard to stay loose and then all of a sudden there's a sudden score, maybe a fumble recovery, kickoff return, interception return. You might not be super loose yet. It's one thing to go out there and pop through a 20-yarder. You back up (another) 13-15 yards and you're a little stiff, you could possibly run into some problems there."On the other foot ..."Any rule change that's designed to highlight what guys do well, I'm all for it," Dawson added. "If that rule change is motivated by, Man, our kickers are really good and we want to showcase what they do well,' I'm all for it."Jets kicker Nick Folk, who has never missed an extra point in his seven-year career, believes longer tries make the more accurate kickers even more valuable. But "I think most kickers want to keep it the same as it's been."So does Tom Coughlin.The Giants coach sees some inequity in moving extra point placements back. He rolled his eyes when asked to assess the experiment."I didn't think much of it when it was suggested," Coughlin said. "There are some ways to change that part of it if the intent is to make it more exciting. I think that certainly would be one of them."I think you have to be aware of the fact that it's a 33-yard (kick) in November when the wind's blowing and it's snowing here and ... in Miami it's 75 degrees. It's a little different in different parts of the country."Coughlin thought extra points would be more interesting if the ball was spotted at the 1-yard line. It might entice more teams to go for 2 points.This year, 16 2-point conversions have been tried in the preseason, with four successful. In 2013, nine were attempted in the first two weeks of the preseason, with four successful.Indianapolis' Adam Vinatieri, who's won four Super Bowls as one of the NFL's best clutch kickers, made all three of his PATs this summer. He agrees with Coughlin that weather can be a factor "when conditions get crummier" and thinks longer kicks might lead to more 2-point attempts."I think it could impact the outcome of games and you may see more teams go for 2 in those situations because they won't want to try (essentially) a 33-yard field goal," Vinatieri said.Denver's Matt Prater, who owns the NFL record with a 64-yard field goal last season, noted that most of the eight misses were by backup kickers.But "now that some guys have missed some. I think they may do it" he added of moving back the extra points.Asked if kickers are being punished for how accurate they are, Prater then said: "No kidding. Why not: The receivers are too good, they can't wear gloves anymore.' 'There are other, more drastic options that might excite the fans if not the coaches and kickers. Perhaps eliminating the kick altogether and requiring teams to go for a conversion with a play.Or, as Eagles coach Chip Kelly suggested:"I think they should narrow the goalposts if they want to make it a little bit (harder), but no one asked me."---AP Pro Football Writers Arnie Stapleton and Rob Maaddi, and Sports Writers Janie McCauley, Michael Marot and Tom Canavan contributed to this story.---AP NFL website: www.pro32.ap.org and www.twitter.com/AP-NFL