Eugenie Bouchard withdraws from US Open after suffering concussion 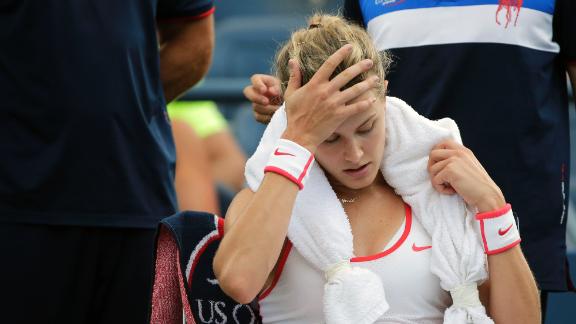 NEW YORK -- Eugenie Bouchard withdrew from the US Open on Sunday before her fourth-round match because of the effects of a concussion she suffered on Friday night in the locker room.

Bouchard, seeded 25th this year, wore a purple hoodie and sunglasses as she slowly walked into the tennis center in the afternoon before her scheduled match to officially withdraw. Because of the nature of her injury, she didn't speak to reporters before leaving.

Bouchard was evaluated by tournament medical staff before officially withdrawing.

The US Open tournament director, David Brewer, said in a prepared statement: "Eugenie Bouchard is withdrawing from the women's singles competition at the 2015 US Open due to a concussion."

Bouchard's injury occurred as she was returning to the locker room in order to take an ice bath late after her news conference on Friday following her mixed doubles victory with Nick Kyrgios, according to a source close to Bouchard who didn't want to be named. Bouchard had also defeatedDominika Cibulkova7-6 (9), 4-6, 6-3 in singles to reach the fourth round earlier in the day.

It was late, and the women's locker room was dark, so Bouchard felt around to find the light. According to the source, there was water on the floor, and Bouchard slipped, falling backward and landing on the back of her head. She went to the emergency room that night. After she was released, there was concern that playing a tennis match would not help her recovery and that she needed rest, the source said.

Bouchard had been hopeful that she'd be able to play despite withdrawing from the ladies and mixed doubles tournaments on Saturday. Her team had been assessing the situation and her options all day, but she could not ignore the symptoms of the injury.

She was slated to play Roberta Vinci in the fourth round.

The US Open did not respond to questions about the liability of the tournament in Bouchard's injury.

The Grand Slams don't have a specific concussion protocol, according to a tournament spokesperson. In general after a player is injured, the tournament medical staff makes a recommendation, which the player can choose to follow or not. In extreme circumstances, a tournament can disqualify a player who could be putting him or herself at risk.

Five Things We Learned: Day 7
Greg Garber and Peter Bodo discuss the five things they learned from Day 7 at the US Open.