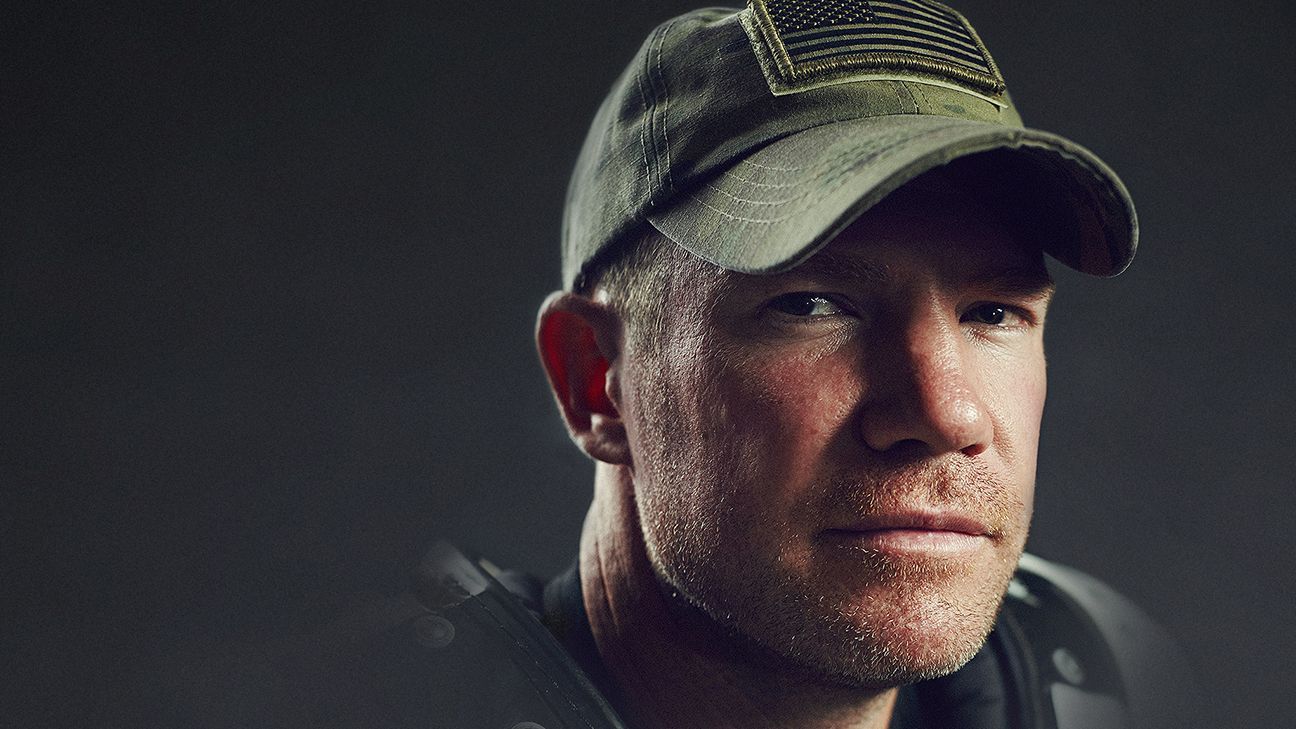 Editor's note: More than a year after penning an open letter to Colin Kaepernick, former Army Green Beret and NFL player Nate Boyer writes another one, this time calling for unity across all sides of the United States. Here's his letter, as told to ESPN San Francisco 49ers reporter Nick Wagoner.

Every. Single. American. Including President Trump, Colin Kaepernick, and my brothers in arms overseas who are wondering, "what in the hell is going on back there?" I'm sitting in the same chair, in the same apartment that I sat in almost a year ago when I wrote an open letter to Colin Kaepernick. I was hurt when I saw him sitting on the bench during the national anthem, but I'm much more hurt now. Not by him, not by where we're at now with the protests, but by us.

Simply put, it seems like we just hate each other; and that is far more painful to me than any protest, or demonstration, or rally, or tweet. We're told to pick a side, there's a line drawn in the sand "are you with us or against us?" It's just not who we are, or at least who we're supposed to be; we're supposed to be better than that, we're Americans. This doesn't even seem to be about right or wrong, but more about right or left.

Today it feels like this national divide isn't even really about the anthem, or the flag, or kneeling, or sitting, or fists in the air. It's not about President Donald Trump, it's not about Colin Kaepernick, it's not about the military, or even police brutality. It feels like it's about winning. That's what makes America so great, our sheer competitiveness. We're winners, and we won't quit until victory is ours.

We see it in sports everyday, we "live and die" by the outcomes of our teams. That desire to win at all cost is costing us greatly now among our neighbors. This winning mentality seems to have spilled over into an obsession with being right and not willing to admit that maybe, just maybe we were wrong. We repeat mantras to ourselves like, "no matter what I will never ever surrender."

Earlier this week I sat down with a group of five Combat Arms and Special Operations Veterans. The round table discussed our individual feelings on the flag, the anthem, and the players who knelt when it was played. We all had very different takes, but what surprised me most at the end of the discussion was that we all agreed on one thing. Colin Kaepernick and President Trump should be the ones uniting our country together. Wait...what? I know it sounds crazy, but maybe that's exactly what we need to see. Maybe that's how we start to heal. Two men sit in a room and talk, simple as that.

That's how it all started with Colin and I, neither of us knew that kneeling would be the result of our conversation. Colin wanted to sit, I wanted him to stand, and so we found a common ground on a knee alongside his teammates. I believe that progress and real change happens in this world when you reach across the divide, you build a bridge, you swallow your pride, you open your mind, you embrace what you don't understand, and ultimately you surrender.

Now I don't pretend to speak for everyone who fought overseas, many veterans rightfully disagree with my position. But I do feel that I echo the sentiments of most war fighters when I say that what we hope for more than anything right now in America is unity. To deploy overseas, train, live with, fight alongside, and ultimately defend foreigners that you have little in common with is truly a challenging task. But returning home to a country that is so divided, so judgmental, and so hateful of one another is almost as difficult to deal with as burying a fallen comrade. In fact we're still losing our brothers in arms overseas right now and it's hardly mentioned it in the media; but that's OK, we don't risk our lives and sacrifice so much for fanfare or recognition. It's not at all why we do what we do. We do what we do because you are worth it, because we love you.

I would love for those two leaders to have that conversation, but more than anything I just want us to love one another again. One great thing about freedom is that you get to choose everyday how you treat your neighbor. This IS the best country in the world, but we can always do better. I'm laying it all out there because I have to, I swore to defend this land and its people, and I will die trying. I know some people will hate this (we love to hate things these days), and I'll get called a disgrace to the Green Beret once again. But I don't care, the United States means more to me than any of that.

Over the past year I've come across veterans from various walks of life. We may actually be the most diverse sub-culture in the America. Since I myself am a Green Beret, I want to share with you a couple of messages that were sent to me from men in my former unit. One of them is white, and one of them is black:

"Hey brother. At first I was with you on the Kaepernick issue. However, I just stood in formation while one of our brothers was pulled off a plane with our nation's flag draped over the coffin. I had to fight back tears as I saw the pain in the eyes of Staff Sergeant T's wife and family. While I would like to sit here and tell you that I rose above it all, I have to be honest. My heart filled with rage. Rage for anyone who takes for granted the ideals and symbols that we fight and die for."

"Hey Brother, this is J. I spent nearly 18 years in 10th Special Forces Group and wish I had an opportunity to meet a brother like yourself. I just want to say I appreciate your views on this national anthem and flag issue. I love our country, but at the same time I have to take the time to tell my sons to act a certain way out of fear for their lives when dealing with police officers. Most of my neighbors and friends here in MD are law enforcement personnel and will tell you they also have to act a certain way to avoid confrontation and situations that normally don't occur for those that are not of color. Not all officers are bad, the majority I believe are good and poor training is attributed to some of these issues we hear of. I really just want to thank you for your taking the time out to understand and convincing him to take a knee and not sit out on what we have fought for. God Bless You Bro!"

Different backgrounds, different experiences, different colors, but at the end of the day they just want the same basic things for their families.

So please, no more lines in the sand, not at home, not among our people. No more choosing sides, no more "for or against." I believe our Veterans will be called upon to lead the way in healing the world and solving its problems; right now our country needs that more than I can remember. So I'll be here, standing in the radical middle, doing what I can to continue fighting for those that can't fight for themselves. Let's get this thing fixed together, you and me. I love you all with all my heart.