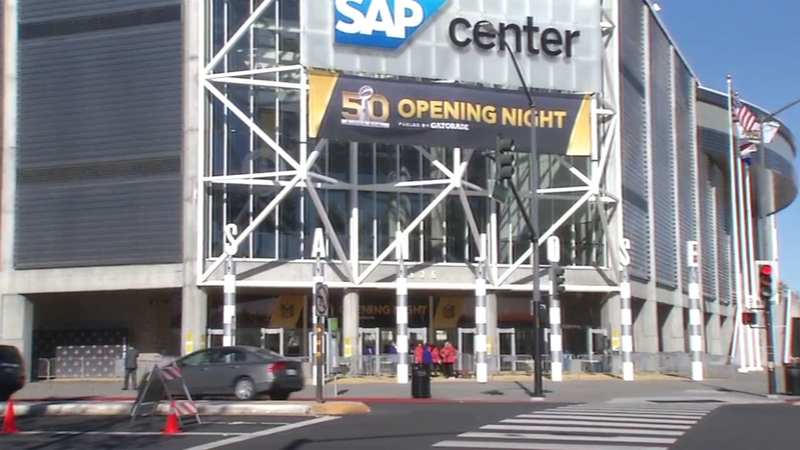 SAN JOSE, Calif. (KGO) -- With Super Bowl 50 less than a week away, Monday night is the opportunity for journalists to grill Denver Broncos and Carolina Panthers players and coaches and for super fans to witness it all.

There's a lot of activity at SAP Center as crews set up for the event, but the "gold carpet" is ready as Media Day has turned into Opening Night.

Bomb sniffing dogs and a lot of law enforcement officers are already on watch.

The Broncos and Panthers landed at San Jose's airport on Sunday.

The players will be at SAP Center Monday night for what used to be called Media Day but they moved it from Tuesday morning to Monday night and made it a big primetime event and opened it up to fans.

At B2 Coffee in San Pedro Square, there's a perfect view of the field. North San Pedro Street is now "super," with yards and yards of green grass.

"It's fun to see people who don't necessarily come downtown come and hang out. Yeah, it's been fun," B2 Coffee's Elliot Hoffman said.

"It's great, you don't have to worry about traffic and it's pretty," San Jose resident Enrique Colin said.

In Plaza de Cesar Chavez, another super is set up - a temporary outdoor cafe and beer garden.

The areas around the Convention Center, hotels, Plaza de Cesar Chavez and the SAP Center have certain restrictions.

The rules are designed to keep counterfeit products, food sales by mobile vendors or food trucks, distribution of free merchandise and the use of drones out of the area.

Opening Night starts at 5 p.m. Unfortunately for fans, tickets are already sold out.