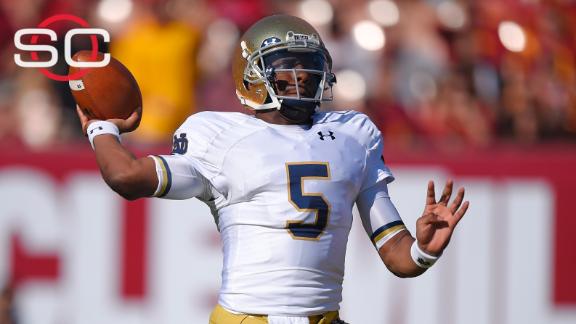 TALLAHASSEE, Fla. -- Less than four months removed from his transfer to Florida State, Everett Golson has been named the Seminoles' starting quarterback.

Coach Jimbo Fisher announced his decision Monday after practice. Golson, a former Notre Dame quarterback who will be a senior this season, has been battling with Sean Maguire since arriving on Florida State's campus in June.

"Where we're at right now and the things [Golson] did, it's what's best for our team at this particular time," Fisher said after practice Monday. "It was a tougher decision because of how well they were playing and not because of what they weren't doing. I'm very pleased with [Golson's] progress and where he's at. He's got a good grasp of things, making reads, making plays, getting on the edge with his legs when he has to. He's doing everything we need to do."

At Notre Dame, Golson started 23 games, including the national championship game against Alabama in the 2012 season. In his two seasons with the Fighting Irish, he threw for 5,850 yards and 41 touchdowns and rushed for 14 more scores. As a junior in 2014, however, he turned the ball over 22 times.

In May, Golson, 22, announced he was transferring from Notre Dame following graduation. He signed with Florida State later that month and arrived in June. The NCAA's graduate transfer rule allows Golson to play immediately because he earned his degree at Notre Dame and has eligibility remaining.

Fisher was not able to work with Golson on the field until preseason practices began Aug. 6 but said he is pleased with Golson's progress since the beginning of camp. Golson's comfort level with the offense and Fisher's expectations have increased over the course of the preseason.

"When the play breaks down he can use his feet and extend the play a little bit longer if necessary," Smith said. "Having that X-factor probably gave him the edge."

Despite a contested camp battle, Golson will be given control of the Seminoles' offense. There won't be any rotation with Maguire, and Fisher said the senior Golson won't receive a quick hook if he struggles early in the season.

"I'm not going to short leash anybody. When I played I didn't want look over my shoulder and know every mistake I made I was getting yanked out. I don't coach that way, but I'll put the guys in the game who are winning football games if something needs to be done," Fisher said. "But you can't play like that, can't coach like that. It's hard to function like that."

The competition between Golson and Maguire was a close one, Fisher said, and Maguire was disappointed with the news but told Fisher he would be ready if needed. Maguire, a redshirt junior, has only started one game in his career, which came against Clemson's No. 1-ranked defense in 2014. Maguire was replacing Jameis Winston, who was suspended. In s win against the Tigers, Maguire completed 21 of 39 attempts for 304 yards, a touchdown and two interceptions.

"Both guys had tremendous camps, and I feel very comfortable with both guys," Fisher said. "Both guys are playing well and we're going to need both guys to play well throughout the year."