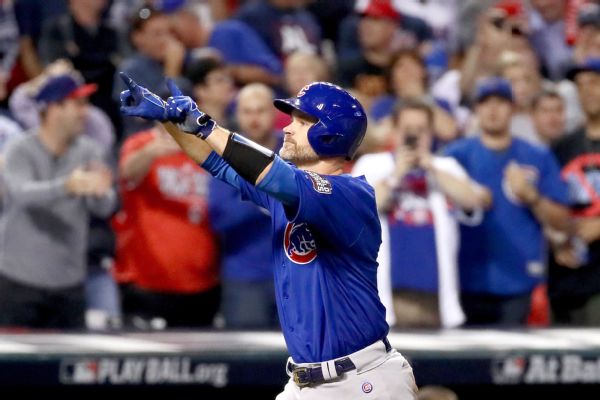 David Ross was in the media spotlight with the Chicago Cubs last season. Now, he'll be a member of the media.

ESPN announced Monday that the former catcher, who won a World Series for the Cubs last season, will join the company as an MLB analyst.

"I'm excited to dive right in and start talking baseball with my new colleagues at ESPN," Ross said in a statement. "It truly is the worldwide leader in sports and I'm grateful for the opportunity to join this incredible team. We're going to have a lot of fun this season."

He retired following the 2016 season after the Cubs defeated the Cleveland Indians in seven games to win the World Series. At 39 years, 228 days, Ross -- who spent two seasons with the Cubs -- became the oldest player to hit a home run in a Game 7 of a World Series.

Known as "Grandpa Rossy," Ross was carried off the field by his teammates following the Game 7 victory that earned the Cubs their first World Series title in 108 years.

After the season, he took a role as a special assistant to baseball operations with the Cubs. According to the team, Ross will assist with major league operations, player development, pro scouting and work within the Cubs' front office. It was not immediately clear how he will balance working for the Cubs and ESPN.

A career .229 hitter, Ross spent 15 years in the majors with seven teams. He had previously won the World Series with the Boston Red Sox in 2013.