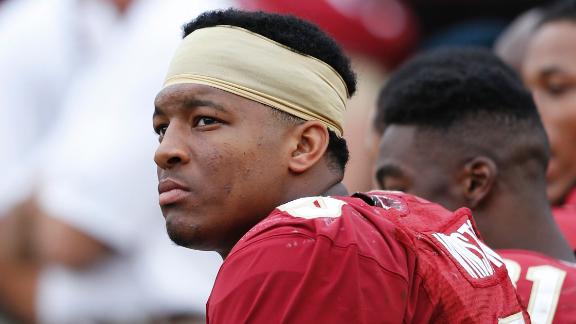 TALLAHASSEE, Fla. -- Florida State late Monday asked a federal judge to throw out a lawsuit filed by a former student who said top NFL prospectJameis Winstonsexually assaulted her in 2012.

The woman filed a lawsuit against the university board of trustees in January, asserting that university officials had knowledge of her alleged sexual harassment and discrimination by the star quarterback and that this created a hostile educational environment for her.

The lawsuit seeks unspecified damages, including reimbursement for tuition, damages for emotional pain and suffering, and loss of past and present earning capacity.

Lawyers for the university's board of trustees contend the lawsuit should be dismissed because it does not show that FSU was responsible for her harassment, but they also maintain they offered her assistance.

The court filing also asserts that while the woman was provided services by the school's victim advocate, no top officials at the school were aware she had accused Winston of rape until a few days before the case became public in November 2013.

The woman wound up leaving school after the investigation against Winston was reported. Winston was not charged by prosecutors in 2013, and he was cleared by the university following a two-day student conduct hearing last year. University lawyers maintain FSU was not responsible for the treatment the woman received once news about the investigation became public.

"Regrettably the media's reporting of (the woman's) allegations led to an Internet and social-media backlash -- harassment that FSU did not cause and in an environment that FSU could not control," states the FSU court filing.

Normally, The Associated Press does not identify the names of people who say they were sexually assaulted.

Winston is expected to be one of the first quarterbacks selected in the NFL draft but faces questions about this case and other off-the-field incidents.

In her lawsuit, the woman said both FSU coach Jimbo Fisher and a senior athletic department official learned from police that Winston was a suspect in a rape investigation in January 2013 -- which was months before Tallahassee police handed over the case to a local prosecutor.

But FSU's lawyers said this is "insufficient to establish actual knowledge on the part of FSU" and that her lawsuit does not show that Fisher and senior associate athletics director Monk Bonasorte knew her identity or that she was a student.