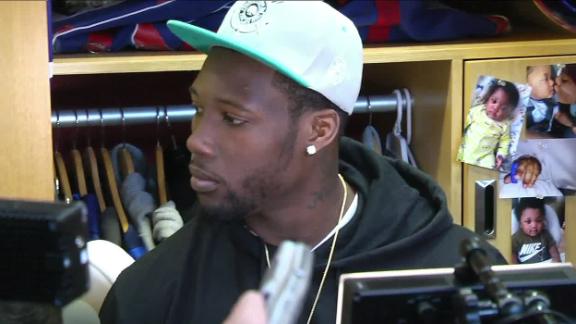 EAST RUTHERFORD, N.J. -- Declining to go into details about his Fourth of July fireworks accident,New York Giantsdefensive endJason Pierre-Paul says he's fortunate to be alive and that he will still be the "same JPP."

"It wasn't frightening at all," Pierre-Paul said as he met with reporters for the first time after having his right index finger amputated as a result of the accident. "I am not going to go into detail with it. It is something I do every year for the kids. ... It just happened. I did it for six, seven years. I live and learn from it and moved on."

"I wasn't worried at all," he added when asked if he was concerned about his career at the time of the accident. "I wasn't in shock or nothing. I looked at my hand and my fiancee was going crazy, but I kept calm through the whole situation."

Saying that he will not have to wear any special equipment other than a four-fingered glove on his surgically-repaired right hand, Pierre-Paul isn't sure when he will return to the field.

The defensive end will not travel to New Orleans for Sunday's game but will increase his workload in practice next week and won't be back until he is fully ready.

Pierre-Paul, who had 12 sacks last season, isn't sure how the hand injury will affect him on the field, but he vowed to be the same player he was before the accident.

"Hopefully it doesn't," he said of how his hand will affect his play. "I am still the same Jason Pierre-Paul. Skill set hasn't changed. Probably got even better."

"I am the same JPP that I was last year," he later added. "There is not going to be a major adjustment. As far as my hand goes, I will get used to it. I am just fortunate enough to play football again."

Pierre-Paul declined to share specifics on what happened when his right hand was severely damaged by the fireworks. He also would not say how it has altered his daily life, if at all.

The defensive end was also cryptic about the accident itself, saying that details will eventually come out.

"I was in the hospital, I don't want to get into details but I saw a kid die, at the age of 12 years old," Pierre-Paul said of his hospital stay after the accident. "One, they had to cut off a whole finger. I am just very fortunate that I am alive. Know what I am saying?

"I look up every day at my hand and say, 'Thank you Lord,'" Pierre-Paul continued. "As far as that, I don't seem worse [than others]. There were probably 12 people in the hospital, and my hand is the best one. I am just fortunate to have one."

Pierre-Paul also would not comment when asked about the perception that he turned his back on the organization early on after the accident when the team sent officials to visit with him in the hospital and see his injury.

"You can't do nothing when you are on anesthesia," Pierre-Paul said of the first few days in the hospital. "You are in and out, going out of conscious. I had no reason not to let them in. I just didn't know. I don't know who was making my decisions. Could have been the doctors. That is over now."

The defensive end agreed to a one-year, incentive-heavy deal with the team earlier this week and is eager to get back to playing football again and helping the pass rush-starved Giants, who have a total of 9.0 sacks so far this season.

"You live and learn," he said about not playing with fireworks in the future. "People make mistakes. We are all humans."

"I have the desire to prove nobody wrong," Pierre-Paul added on what he has to prove. "The day I walked in here, I already won. People said I would be out for the whole season. I knew the kind of effort I put in the offseason way before this happened. Just coming back, I already won."