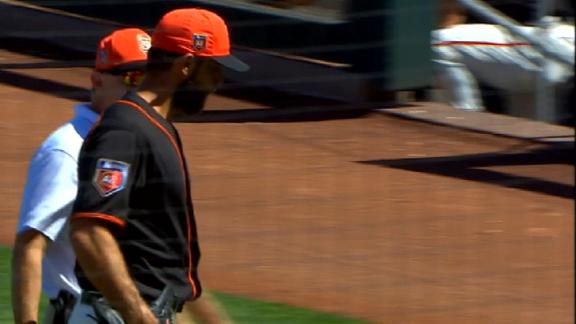 SAN FRANCISCO -- Giants ace Madison Bumgarner is expected to miss at least the first two months of the season after undergoing surgery Saturday to have three pins inserted into the broken pinkie on his pitching hand.

The 28-year-old lefty was injured Friday when he was hit by a line drive off the bat of Kansas City's Whit Merrifield in a spring training game. The outing was supposed to be the final tuneup for Bumgarner before he started on Opening Day.

"We're looking at a couple months, give or take," Giants manager Bruce Bochy said before San Francisco's exhibition game against its Triple-A club in Sacramento. "It's going to take a while. I guess the good news we got this morning is they really felt good about the surgery."

Bumgarner will have the pins in his pinkie for a month, according to Bochy. It will take another two weeks after that before the 2014 World Series MVP can resume throwing.

"We're hoping by early June he'll be pitching for us," Bochy said.

Bumgarner had a 3.43 ERA with 30 strikeouts in 21 innings this spring. Bochy said the left-hander was in peak form before getting hurt.

"That's saying a lot because he's been so good, but he was really locked in with his delivery. He made a couple little adjustments and was throwing the ball beautifully," Bochy said. "That's the thing that makes me sick about this. We're losing our No. 1 guy, but also where he was as we were starting the season."

San Francisco already had to juggle its rotation plans after No. 3 starter Jeff Samardzija went down with a strained pectoral muscle. Now, Bochy is scrambling to replace Bumgarner.

Although the skipper declined to announce a replacement for Opening Day, Ty Blach seems to be the logical choice. Blach filled in for Bumgarner last season, when he missed nearly three months with a shoulder injury after a dirt bike accident on April 20 during an off day in Colorado.

Johnny Cueto, Derek Holland and Chris Stratton are the other likely starters while Bumgarner and Samardzija rehab.

"We're having to call an audible on a couple things, one with Samardzija, but of course now with Bumgarner," Bochy said. "We have a good idea, but we're just checking off all the boxes."

The Giants have some time on their side. They won't need a fifth starter until April 10, and it's possible Samardzija could be back shortly after that, though Bochy said that was an optimistic outlook.

"With Samardzija's situation, we don't have a definite date when he's going to be back," Bochy said. "We have to be prepared in case it is a little bit longer."

With an improved lineup bolstered by a pair of offseason trades, Bochy and several Giants players believe they are in a better position to handle the loss of two starters than they were last season when Bumgarner got hurt. Cueto, San Francisco's No. 2 starter in 2017, also missed more than a month last year with blisters and a forearm strain.

The Giants made deals for third baseman Evan Longoria and outfielder Andrew McCutchen this offseason with the hopes of improving an offense that ranked last in the majors in homers and slugging percentage and 29th in runs.

"I think without question we're better equipped to deal with this than what we were last year," Bochy said. "Again, it's something we'll find out here real soon. I feel good about this club and their ability to handle something like this and show how resilient they are."

"We have a lot of great position players. We have a good defense out here," Pence said. "We just have to pull our weight until he gets back. You're not going to be able to replace [Bumgarner]. He's one of the best in the world. It's going to be tough, but we just have to get out there and play with what we got.

"It could have been a lot worse. He's got a rehab program he has to go through. We'll be getting him back, and that's exciting."