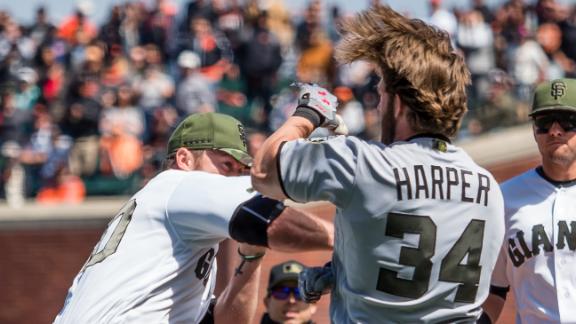 The penalty stemmed from a benches-clearing incident between the Giants and Washington Nationals on May 29.

Strickland plunked Harper on the right hip with a 98 mph fastball, igniting an eighth-inning fight that ended with Strickland being dragged to the Giants dugout by several teammates.

Harper was suspended for four games, which was reduced to three games after his appeal. He has already served the penalty.

John McHale Jr., a special assistant to baseball Commissioner Rob Manfred, denied Strickland's appeal, which means the pitcher will miss all four games of a series set to begin Monday in Atlanta against the Braves, as well as the first two games of a weekend series in San Francisco against the New York Mets.

"It's good to finally get this out of the way so we can focus on going forward," he said before Monday's game at SunTrust Park. "That's six games we don't have him. We knew this was coming."

San Francisco must go with a 24-man roster while Strickland is suspended. The team already was carrying 13 pitchers, so Bochy said there were no immediate plans to add another.

"We're good to go in the bullpen," Bochy said. "If we get in a bind, we'll get a pitcher up here (from the minors). We have guys who give us some options."

The brawl happened in the first meeting between the players since Harper hit two home runs off Strickland during the 2014 NL Division Series.

Despite their history, Harper said at the time he didn't step into the box worrying that Strickland would hit him, "especially since it's been three years and they won the World Series that year."

"I wasn't really thinking about it at all," Harper said. "But when somebody comes at you like that, throws a 90 mph fastball where he did, I wasn't very happy with it and took it into my hands and tried to go after him."

After being struck by the pitch, Harper quickly ran toward the mound, slung his batting helmet and exchanged punchers with the right-hander.

Strickland insisted he was merely trying to throw inside, but added that once Harper charged the mound "it was go time."