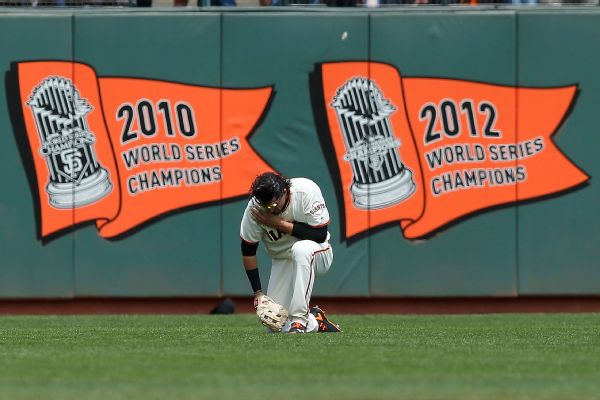 SAN FRANCISCO -- Jarrett Parker was placed on the 10-day disabled list by the San Francisco Giants on Sunday, a day after he broke his collarbone by slamming into the fence while catching a fly ball.

The 28-year-old, hitting .143 in nine games this season, robbed Colorado's DJ LeMahieu of a potential extra-base hit in the Rockies' 5-0 win Saturday at San Francisco.

Giants manager Bruce Bochy said Sunday that Parker likely will be out for about eight weeks.

"He's probably looking at some kind of surgery to get it fixed," Bochy said. "They do need to get it fixed, so this thing will heal quicker and we'll get him back sooner."

Bochy said Parker "about passed out from the pain" and was very upset Saturday.

"He was really down," the manager said. "This kid's finally getting his opportunity to play in the major leagues, and then this. He was worried he would be out for the season."

With Mac Williamson also on the disabled list with a strained left quadriceps, Chris Marrero was in the starting lineup as the Giants' left fielder on Sunday against the Rockies.

San Francisco recalled left-hander Steven Okert from the Triple-A Sacramento River Cats to take Parker's place on the active roster. Okert, recalled for the second time this season, allowed one hit in two scoreless innings during two appearances for Sacramento.