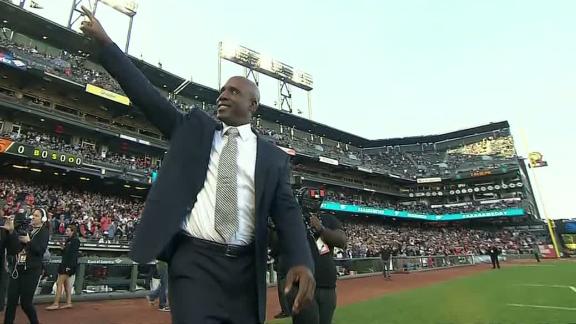 SAN FRANCISCO -- The San Francisco Giants honored home run king Barry Bonds with the unveiling of a plaque bearing his likeness on the team's Wall of Fame during a pregame ceremony Saturday.

Nearly 1,000 fans lined up behind barricades not far from the players' entrance at AT&T Park to witness a 40-minute ceremony honoring Bonds. Several of Bonds' former teammates were on hand, as was Giants manager Bruce Bochy, along with Hall of Famers Willie McCovey and Willie Mays, who is Bonds' godfather.

With his mother, Pat, along with his three children seated on a stage nearby, Bonds joined former Giants owner Peter Magowan and current chief executive officer Larry Baer in the unveiling of the plaque, which features Bonds' face in the middle flanked by action shots of him on either side.

Bonds, dressed in a dark-colored suit with a white shirt and gray tie, thanked ownership and fans and spoke of his excitement over signing with the Giants in 1992. His father, Bobby, and Mays also played for the Giants.

A 14-time All-Star, Bonds won five of his seven MVP awards while playing for the Giants from 1993 through the 2007 season. He finished his career with 762 home runs during his 22-year career with the Giants and Pittsburgh Pirates.

Bonds honored by fans, throws out first pitch
Barry Bonds receives a warm ovation from Giants fans on the day a plaque of his likeness was added to the team's Wall of Fame. Bonds then throws out the first pitch to his son Nikolai.

US jobs report shows 16.6M applied for unemployment in 3 weeks