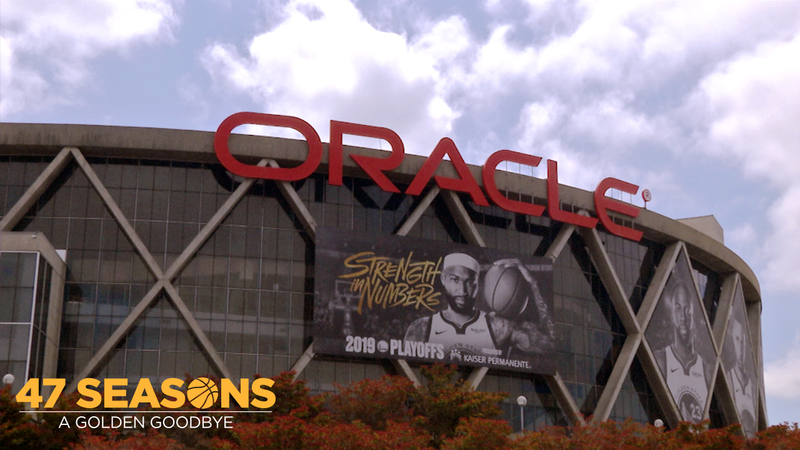 OAKLAND, Calif. (KGO) -- After 47 seasons, the Golden State Warriors will leave the Oakland-Alameda County Arena, ending an era with a Golden goodbye.

The Oakland-Alameda County Coliseum Arena, now known as Oracle Arena, opened in 1966. It has been home to roller derby teams, memorable concerts, the circus, and since 1971, it has been the home of the Bay Area's only professional basketball team, the Golden State Warriors.

But age has taken a toll on the Oakland Arena.

The oldest stadium in the NBA packed in nearly 20,000 fans for a game.

But it is outdated, last remodeled in 1996 to accommodate the growing popularity of the Warriors franchise.

The arena isn't being torn down, but it is being replaced 10 miles away, across the bay, in San Francisco.

Eric Housen is the director of team operations for the Warriors. You may have caught a glimpse of him during a game running around the edge of the court. He has been with the team since 1986.

"It's tough to think about moving you know," said Housen,"It's going to be great and new and exciting over there, but it is tough to leave Oracle in that the history of it that we were bad and now we're good."

The Warriors will move to a shiny new home, for a team that grew up in the East Bay.

But the building that is the Oakland Arena will be remembered for building the Warriors into the team they are today. The arena was the home court for not just players, but fans and the people who worked for the team too.

VIDEO: By the Numbers: A look at Golden State Warriors' Chase Center in San Francisco

"You know growing up I didn't know anything else," said Housen, "This was my team from when I was a kid. It has always been the fabric of Oakland. Such a hard working gritty city. People pay good money to see us play. Good or bad, you know? The fans are always there it was like a sixth man, just the passion they brought every night."

Fans say the arena, and the Warriors gave the city of Oakland a source of civic pride.

David McDonald is one of those sixth fans.

"It created a fan base you know," said McDonald. "Oakland was on the map. It wasn't really San Francisco or the Bay at that time. It was Oakland. I grew up walking distance from the Coliseum. There were times as a little boy I'd tell my mom, 'Oh, I am going to the ballpark.' And she would think that I am going to Greeman Field, which is right up the street."

McDonald went on to say, "But my mom didn't know I was going to the Coliseum and didn't have no money in my pocket as a kid, but we had ways of getting in, or some of the guards would turn the other cheek and let us into the game."

These days he doesn't have to sneak in. He has tickets.

He's sad to see the Warriors leave Oakland, but he recognizes that the team deserves more than what the Oakland Arena offers.

"They've outgrown it," said McDonald. "That particular market and since San Francisco is basically the dot-com, the tech, there's more money to be made going to San Francisco, and I think it's a great business decision. It's a shame that it has to come to that, but that's prevalent throughout all sports."

Don Moffet has spent the last 20 years being a friend to the Warrior faithful.

"Think the Warrior fan is someone who has been pretty dedicated from day one all the way back to the sixties," said Moffet. "I've seen it kind of through the sixties the seventies and the eighties, and even though there was so many tough times, the fan base has been pretty amazing, and obviously they have been rewarded, especially these last five years."

Moffet adds, "I think one of the most exciting things is that our migration rate going into the city is about 70 percent, so many are going over, so that's pretty exciting."

The Oakland Arena has been home to some of the greatest basketball players of all time. The team traded Wilt Chamberlain before cutting ties with Philadelphia and moving to San Francisco.

With star players like Jamaal Wilkes, the Warriors won their third championship, their first in the Bay Area in 1975. Ironically, the team had to play at the Cow Palace in San Francisco because the Oakland Arena had been booked for an ice show.

"From Rick Barry, Nate the Great, the chairman of the board, you know Al Attles, all the Warriors that came along that contributed to the foundation of a great team," said Housen.

Schoenthal adds, "Some of the biggest are the "RUN TMC" era even though it was only two years."

RUN TMC -- the trifecta of Tim Hardaway, Mitch Richmond and Chris Mullin -- drove the team to become playoff regulars in the early nineties.

Those guys kind of put the Warriors on the map," said Housen, "All of the sudden, we had won 55 games. Back then it was a different brand of basketball."

After failing to win a championship ring, the team traded and shuffled players around into an era of rebuilding in the 2000s.

"Then all the bad years with the Warriors not being in the playoffs when they traded Chris Weber away and that just seemed to be a jinx," said Schoenthal.

The Warriors rose from the ashes in the 2010s, led by Stephen Curry. The team followed up with All-Stars Klay Thompson and Draymond Green.

"Obviously the championship, winning it at home, was incredible," said Housen.

The team captured the championship in 2015 before winning another two in 2017 and 2018 with the help of former league MVP Kevin Durant.

Few people who work in the arena know the players today better than Curtis Jones. He stands at the tunnel where the team takes to the court.

He's also the guy who tosses the ball to Stephen Curry for that 3-point tunnel shot before every home game.

"Steph was out warming up one day and he was shooting these deep shots from the corner, you know from the tunnel, so I just got into a conversation about it," Jones said. "You know, we developed a rapport or whatever. And he just started throwing me the ball. So I just started passing the ball and we went from there."

He says the Warriors star player is a role model and essence of what it means to be a Golden State Warrior.

"He's a really grounded, down to earth person," said Jones. "You know you can tell that he has great values and morals and you can tell that he is really, really passionate, compassionate person because there are times when they are given a certain amount of time to warm up. Then he has a certain amount of time to sign autographs. And then sometimes some kids would come that wasn't in a position to get autographs. And, you know, Steph will look over and he'll give me a nod, so I'll send a little child down or whatever."

Curtis has worked at the Coliseum for 25 years. It's his job to keep players and fans safe, but also ensure that everyone has a memorable time. Regardless of where they are sitting.

VIDEO: ABC7's 360 sneak peek inside the Warriors' new home at the Chase Center

Curtis is hoping to follow the Warriors to the Chase Center.

Mildred Traylor, on the other hand, won't be going.

Traylor is 84 years old and a die-hard Warrriors fan. She's been a fixture in the Oakland Arena for 22 years.

She says Warriors fans hold a special place in her heart.

"The Warriors have something that you can't copy, because it is in here," she said pointing to her chest. "It is the heart of the team, and you can't copy that."

She says many people have been coming so long, that workers and fans have grown old together, had children together, and celebrated victories together.

"This place has a history of family to me, because people have been around each other for so long," Traylor said. "Season ticket holders for years they've seen kids grow up they've seen them bring their family and the people that work here. We have a lot of people that's been here longer than I have, like 35 to 40 years."

She's retiring at the end of the season.

When the last ball is tossed on the last night, she will join others reflecting on the memories that this building holds.

Empty seats that will never again hear the sounds that gave this place its nickname... "Roaracle."

The lights will go out on this golden era.

"It's been my whole life," Housen said. "So to not have the team there is going to be a little strange. But, you know, it's time to move."

Golden State Warriors President Rick Welts says though the team will move its headquarters and training facility to San Francisco, it will not be leaving Oakland behind.

"It'll be a really a special moment," he said. "I think players, coaches, fans are all going to come to that realization and hopefully it's in the midst of a crazy celebration. But even if it's not I don't think it's going to take away from the memories of Oracle Arena."

The team is not likely to ever play in the Coliseum Arena again. Its offices and practice facility on top of a parking garage in downtown Oakland will become the epicenter of blue and gold pride for East Bay Warrior Fans.

"We're repurposing our existing headquarters facility for a community benefit to Oakland we'll be there for a long, long time to come," Welts said. "We're, you know, we're leaving in building. We're not leaving the city. We said that over and over again this year and I and I hope our actions will back up those words."

The offices will be turned over to Oakland based nonprofits. The training facility will become one of the largest basketball camps in the NBA.

The arena has more than 250 events scheduled for the next year. But none are likely to be as memorable as that last Warriors game.

"I hope a lot of people are going to walk away after that last Warriors game with a lot of really great memories," said Welts.