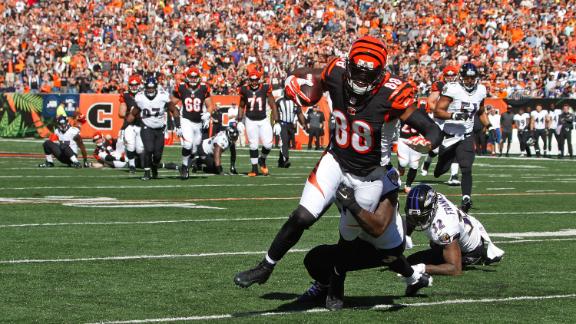 BEREA, Ohio -- Greg Little isn't the first player to say he wants vengeance on his former team. But he is the most recent.

Tuesday, the Cincinnati Bengals wide receiver said that "somebody has to pay" during Thursday night's game for the fact the Cleveland Browns released him in May.

"Everything about this game is personal for me," he told the Cincinnati media about his first game against his old team Thursday night.

Little was released even though the Browns knew that Josh Gordon would be suspended, and before the team signed Miles Austin.

"They said that I wasn't good enough to play on their team," Little added, "and that's about all else that I need."

Little was claimed by the Raiders after being released by the Browns, but was cut by Oakland before the season. He did not sign again until he joined Cincinnati on Oct. 14.

Little did not want to talk about the Browns when he signed with Cincinnati a month ago. Playing the Browns changed that stance.

"We don't make anything of it. The game is played in between the lines," Whitner said. "Obviously he feels some type of way. I have nothing to do with that. I don't know how he feels. When we get between the lines it's just another wide receiver that we're facing. We'll see."

"I did not get along with Pettine," he said. "Pettine doesn't talk with any of his players. Like you will walk past him in the hallway and he won't even speak to you. To have that type of [approach] for a coach is kind of odd.

"I can't go out and say I'm going to lay it on the line for a guy who won't even speak to me if we were the only two people in the hallway."

"I understand the frustration. I don't like it when people say 'it's business, it's not personal.' It is personal. I agree with him. It is personal," Pettine said. "That's their livelihood. Their family is here. It is very personal when something like that happens."

Pettine, however, disputed Little's claim that he doesn't talk to his players.

"It's unfortunate, because the one thing I really pride myself on is communication," he said. "Not just with the players, but with the staff and the building. Because I think that's important. You very much learn as a coach that it's less about the Xs and Os and it's more about relationships and the human side of things than people would think."

Browns players as varied as Joe Thomas, Joe Haden and Jordan Cameron have all praised Pettine's honesty and approach. Whitner also came to his coach's defense.

Little missed his senior season at North Carolina after being suspended for committing NCAA violations. He was a second-round draft pick for the Browns, but his career was known more for dropped passes, speeding tickets, touchdown celebrations and first-down signals in losses and off-field talk than it was for excellent seasons. (One TD celebration took place in a loss in Cincinnati, when Little imitated sprinter Usain Bolt and then tweeted a photo of himself doing the pose after the game.)

Little has four receptions for 55 yards in three games for the Bengals. He played 38 snaps in Cincinnati's win over Jacksonville on Sunday.

In three seasons in Cleveland he had 155 receptions for 1,821 yards and eight touchdowns. He has caught 50 percent of the passes thrown to him.

According to ESPN Stats & Information, Little has 25 career drops, 23 with the Browns. Taken as a percentage, Little has dropped 8.3 percent of the passes thrown to him, the highest percentage in the NFL since 2011, per Stats & Info.

"[The game] means a lot," Little said. "I said before, everything about this game is personal to me. I'm going to go out and lay it on the line."