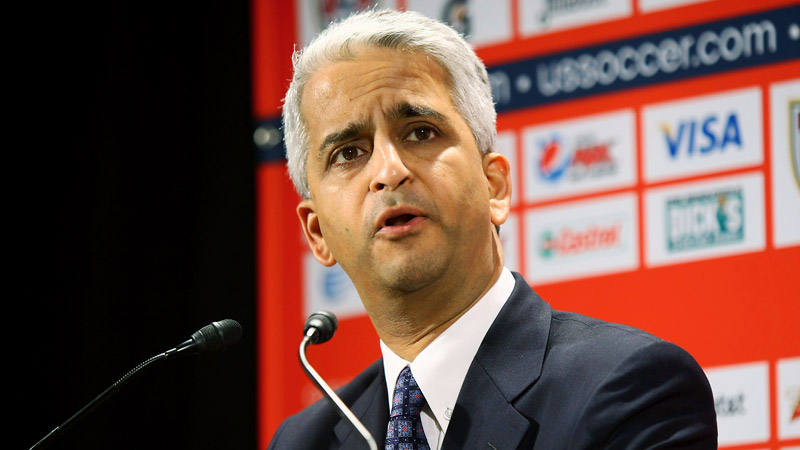 "I think it's probably three or four things," Gulati said of the reasons that led to Sermanni's dismissal after just 18 months on the job.

"One is the overall evaluation of where the team's going and heading. Two is talking to people in and around the team. Whenever we have changes ... we talk to players, we talk to staff, we talk to people who observe the team and we also rely on our own assessment."

Third, Gulati said, were the results at last month's Algarve Cup, where Sermanni lost the first two games of his U.S. tenure -- including an embarrassing defeat vs. Denmark -- en route to a seventh-place finish.

"The standards for this team are very high," said Gulati, who stressed that the poor showing in the annual tournament in Portugal was not the biggest reason for the switch.

"It's all of those factors," he said.

Gulati also insisted the move was not made following any player revolt.

"We had discussions with players, with staff, with people around the team and observed ourselves," he said. "This isn't a group of players coming to seek us out and saying 'there's something wrong, we need to do something.' That's not what was the underlying issue here."

Whether it was tactics, personality or something else, the underlying issue, it seems, was that it became clear that Sermanni simply wasn't the right fit for a rebuilding team hoping to win its first World Cup since 1999 next summer in Canada. Gulati said he'd only spoken to Sermanni once since the Algarve Cup, and never asked him to make any changes to his approach.

And even though Gulati "thought Tom was the best candidate when we hired him," he said he still has full confidence in the federation's selection committee, which chose Sermanni after Sundhage stepped down following the successful 2012 Olympics.

"It was virtually the same [group] that we used in hiring Pia, and she won two [Olympic] gold medals and lost on penalty kicks in a World Cup final," Gulati said. "So I'm not sure it's about the process."

With the 2015 Women's World Cup just 15 months away, Gulati said he's hoping to hire a permanent replacement for Sermanni as soon as possible. Qualifying begins in October, but Gulati said he wants to have the program's next coach in place well before that.

"Certainly by the summertime schedule we want to have [someone] in place, if not sooner," he said.

Jill Ellis, who on Sunday was named the team's interim coach -- the same role she filled after Sundhage left -- is one potential candidate. Ellis asked not to be considered for the full-time job when it was last available, but whether she's interested now is unclear.

"We haven't really addressed that with her [yet]," Gulati said, adding that the federation already has compiled what he characterized as a "a very short list."

Whoever is hired, their gender and nationality -- Sermanni is Scottish -- won't carry as much weight as their qualifications, according to Gulati.

"The first consideration," he said, "has to be taking the person who is best to lead the program to keep it at the level we're all accustomed to."

Trump says 'life and death' at stake in following guidelines