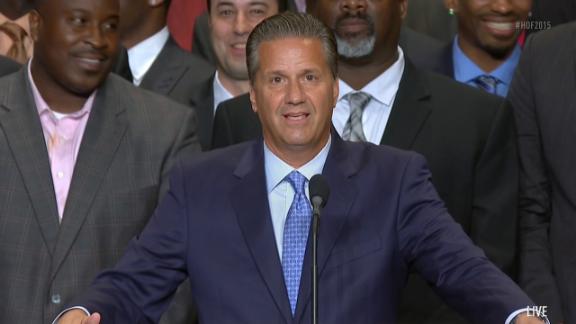 SPRINGFIELD, Mass. -- John Calipari never could have been a Hall of Famer on his own ability.

"I never grabbed a rebound," he said. "I never scored a point. I never had an assist."

But he's had some incredible players.

And when he was enshrined in the Naismith Memorial Basketball Hall of Fame on Friday night, he insisted many of them join him.

From Marcus Camby, who helped him build a program atMassachusetts, to Anthony Davis and DeMarcus Cousins, who solidified a powerhouse atKentucky, Calipari was backed by dozensof the players who have made him one of college basketball's most successful coaches.

"As you can see, I have been blessed to have all those opportunities," Calipari said, "but the reason I stand here is more about the players I've coached."

Calipari was the last of the 11-member class of 2015 to speak in the ceremony inside Symphony Hall, not far from where he got his first head-coaching job at 29 at the University of Massachusetts.

There was a brief stint with the NBA's New Jersey Nets before he went to theUniversity of Memphisand now Kentucky. Final Four appearances at the first two stops were vacated by NCAA penalties, but hegot a national title in 2012 with the Wildcats.

He's done it often with one-and-done players, who stay in college for a season before bolting for the NBA.

Those players owe a debt of gratitude to Haywood.

His battle with the NBA that went all the way to the U.S. Supreme Court in 1970 knocked down the age requirement that required players to be four years removed from high school. Once in the league, he went on to play 12 seasons, make four All-Star teams and win a championship.

"Remember guys, I had game," Haywood said. "It was not like I just did this Supreme Court thing. I had some serious game."

So did Mutombo, a fierce defender and shot-blocker for 18 seasons. He said he was proud to have been the third African to play in the NBA, "to come to the U.S. with nothing and now I'm part of the NBA history."

And he's giving back, opening a hospital in his homeland of Congo that he said has served 140,000 people. He twice won the NBA's J. Walter Kennedy Citizenship Award and now works for the league as a global ambassador.

"Playing basketball allowed me to become a global citizen," Mutombo said, adding that he may not have won a championship "but I'm a champion to so many people."

Bavetta never missed an assignment while working 2,635 regular-season games over 39 NBA seasons. He had the crowd inside the building chant "Oh no, bad call, get a job!" before his speech.

"I'm not used to people telling me how great a referee I was, how nice it is to see me," he said.

It was a big night for the home state. Calipari had plenty of UMass fans screaming for him as he entered the building. Heinsohn won two titles as a coach on a team that included White, who had surgery to remove a brain tumor in 2010 and taped his speech, but drew a huge ovation when he came on stage after.

Though the local fans -- and likely everyone in the building -- were a little stunned when Heinsohn extended his middle finger during his speech while telling a story of the time one of his own players flipped him off during a game.

It was also a celebration for Kentucky. Dampier played for the Wildcats and went on to nine seasons with the ABA's Kentucky Colonels, helping them win the 1975 title.

He was followed on stage by Calipari, who acknowledged his own coaches in high school and college, his assistants, and eventually the players -- some of whom may end up back in Springfield for their own Hall of Fame inductions someday.

"The journey that I've been on, I've been so blessed, and it's been an incredible journey," Calipari said.