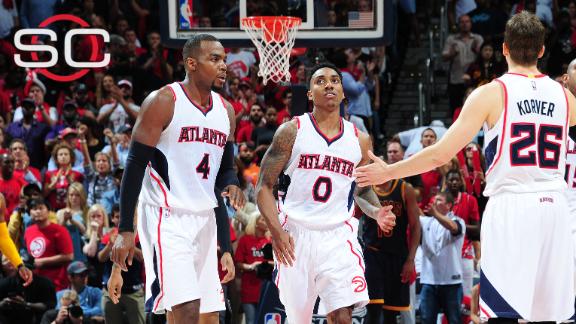 The Atlanta Hawks are engaged in serious internal discussions ahead of the Feb. 18 trade deadline about the future direction of their team and their core players, including three All-Stars from their historic 2014-15 team:Al Horford, Jeff Teague and Kyle Korver.

After winning a franchise-high 60 games last season, the Hawks are currently 30-24 and fifth in the Eastern Conference after consecutive losses to the Orlando Magic on Sunday and Monday. Atlanta is clustered with a scrum of seven teams separated by only 4 games behind the Cleveland Cavaliers and Toronto Raptors.

Sources with knowledge of the team's thinking say that Hawks management and ownership have conceded internally that unless Atlanta can recapture the magic of last season's run -- when it went 60-22 and claimed the East's top seed -- this season's team is a fringe contender.

This realization has prompted Atlanta to think long and hard about Horford, who is in the final year of a five-year, $60 million contract extension. The Hawks must decide whether to re-sign their big man to a hefty five-year deal, or try to move him now while they can get value.

If the Hawks decide to test the market for Horford, numerous teams would potentially show interest. Sources inform ESPN that the Boston Celtics, Denver Nuggets, and Magic have been the most aggressive in looking to acquire a veteran difference maker.

The expectation is a robust market for Horford, who will be an unrestricted free agent for the first time this summer after nine seasons with the Hawks. Because of the anticipated demand, Horford is likely to receive offers up to the maximum amount, which would be $144.5 million over five years should he stay with the Hawks.

Under that kind of contract, Horford would turn 35 (and would earn $32.7 million) in the final year of the deal. Sources say that while ownership has pledged to both spend and to entrust the Hawks' basketball minds to make basketball decisions, that figure, along with the overall tab -- which would be one of the richest contracts in the NBA -- has the Hawks' brass a bit skittish.

Should Horford remain with the Hawks through the conclusion of the season, a rival team could offer him a maximum of four years and $107.3 million.

The Hawks won't deny they're tackling the difficult exercise of determining whether to forge ahead with the current core or to disassemble the roster in an effort to retool for the future. Sources close to the organization emphasize that if the Hawks become active in the next week, it will not be to "blow it up," but rather an attempt to exchange their existing players for commensurate, if younger, talent.

A persistent hip injury to Tiago Splitter will also factor into the Hawks' strategy as sources say the reserve center is seeking opinions and considering surgery. Whatever his course of treatment, Splitter will be out for an extended period. His absence is very problematic for a Hawks team that ranks last in the league in rebounding rate and is thin on its front line.

The Hawks have been gauging the market for point guard Teague, who has started 345 games for Atlanta over the past four and a half seasons. Sources say the Indiana Pacers have made inquiries and have dangled guard George Hill as a possible swap. The Magic are also potential suitors for Teague, sources confirmed.

Teague's favorable contract, which will pay him $8 million in 2016-17, coupled with the potential shown by backup Dennis Schroder, has rendered the seven-year veteran shoppable. Schoder, chosen with the 17th overall pick in the 2013 draft, emerged last season as a potent, if sometimes erratic weapon off the bench. In addition, the coaching staff admires the 22-year-old's competitive streak, a quality the mellower Teague exhibits more sparingly.

In a league increasingly focused on shooting, long-range specialist Korver is another player who has attracted interest, though sources say he is less likely to leave Atlanta.

While staying the course might lead to nothing more than a second-round exit for the Hawks, the alternative demolition plan is fraught with complications.

Budenholzer regards Horford and Korver as essential to both what the Hawks do on the floor and the professionalism they've cultivated in the locker room. In addition, the Hawks' recent success has resulted in generous bumps in season-ticket sales, sponsorships and local television ratings, growth which would potentially be put at risk were the Hawks to ship out mainstays such as Horford, Korver and Teague.

In addition, Antony Ressler, who closed on his purchase of the Hawks in June 2015, could see his early reign as owner compromised by imploding the Hawks' roster.