Heat's Chris Bosh on absence: Maybe this is what I need 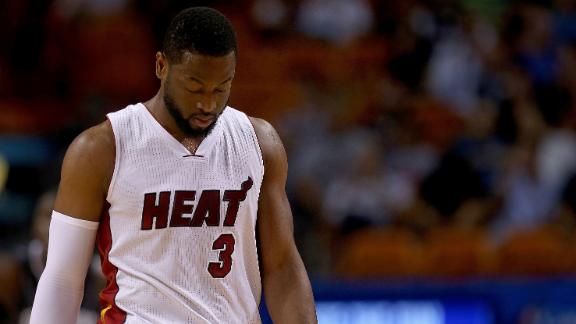 The longest offseason in seven years awaits the Miami Heat, but Chris Bosh, who was diagnosed with blood clots in his lungs and hasn't taken a shot since All-Star Weekend, isn't going to let it get him down.


"As I got ill, the afterthought was maybe I need to miss basketball," said Bosh, who added that he's still on blood thinners. "I miss it. And I've still got five more months, 5 1/2 more months.

"Maybe this is what I need. I need to recharge my passion because I was getting beat down a little bit over the last four years. That's what success does. Now I can go back in the lab and work on my game."


Bosh, who said he played with blood clots in his lungs for "three weeks probably" before being diagnosed,expects to be able to touch a basketball in June or July.


He isn't the only one who is motivated after the Heat failed to make the postseason for just the fourth time in Erik Spoelstra's two decades with the team-- starting in the video room to now having just wrapped his seventh season as head coach.

"I would rather be working right now," Spoelstra said. "And I know it'll be very painful this weekend when everything starts up. We've built this standard. The one thing I've learned in 20 years is you can't take it for granted. We have a great history here within this organization but nothing is guaranteed."


Dwyane Wade, who will meet with doctors in the next few days for his usual end-of-season evaluations, echoed those sentiments.


"I know one thing about the Miami Heat organization," said Wade, who has the ability to opt out of his contract this offseason if he so chooses. "We don't just sit around and hope. We get to work."